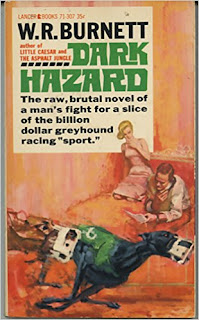 I’ll start by putting this into context. Thirty years or more ago, my brother and I got into gambling. We tried lots of different approaches. Among them was a foolproof system of betting on the dogs. I’d drop Geoff down at the track, he’d spend a night watching Bugsy spinning around the arena and we’d count our winnings. Except they were rarely winnings now I come to think of it, which I guess made us the fools. In later years, I got into visiting Walthamstow, a stadium that was beautiful in itself and had pictures up in the bar of a visit by George Raft from way back. I can also remember being down at a bookie’s in Kentish Town feeling flush after a fair win one night after work. When the cash was gone, I went to my savings account and took out the last five pounds I had in the world (pretty low times now I can reflect on them). I put the fiver on the likely one-two-three and what do you know? They only came in and netted me a fair stash. Several hundred pounds as I recall. Needless to say it was all gone by the end of the week and I had to move out of my flat. I’m leaving my tale of woe right there. It’s no wonder that when I see all the gambling adverts on the TV or plastered over the waistcoats of snooker players and the like that I feel despair. In case you’ve ever wondered where the companies get their huge advertising budgets, I’ll point you in the direction of the punters.

I mention that to explain why Dark Hazard had so much appeal to me. On the front cover ‘The raw, brutal novel of a man’s fight for a slice of the billion dollar greyhound racing sport.’ Of course I was going to be interested.

Being interested in a subject is never enough to make a good story, however. We all know that there’s so much more to fiction than that.

So here are some of the reasons I absolutely loved this one.

Every chapter is full of drive and energy. The protagonist is always on the edge and the next pitfall lies just around the corner. None of the holes feels like a contrived piece of digging, it’s just the way Jim Turner is made. We know he can’t resist a detour from his dreary existence, not matter how hard he tries to keep life straight.

Jim has everything to lose and he’s such a great creation that the idea of him putting his world into jeopardy leaves a reader in a state of almost constant anxiety.

The murky world of the dog track and all its characters is a delight to hang around in.

The alternative Jim has to a life of excitement and flowing juices is one of the steady and the mundane. Settling into a place where respectability is the main goal and religion provides the fuel for existence is a suffocating prospect.

The writing is tight as hell. Dialogue uses just the words it requires. The sentences are mainly spare, yet there is still room for insightful observation and detailed description. Each environment comes to life in all its dimensions, yet this is never presented as clutter. There's no more or no less than is needed.

And Dark Hazard. He’s the star of the show. A sleek black dog who goes about life with no fuss or frills. He’s talented, beautiful and fragile. It’s no wonder Jim falls head over heals for him and no surprise that in his obsessive way he’ll do practically anything to get to own him.

Loved this one. The time and place are perfect for such stories to be told and the quality of the story telling is about as good as it gets.