One Man's Opinion: THE WHITES by RICHARD PRICE 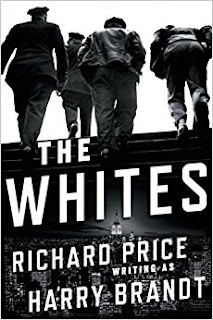 Pavlicek was nearly big enough to have his own zip code.

Billy Graves once belonged to a tight-knit group of police officers who ruled the roost in their neighbourhood and used a range of methods to burn through the criminal community. The bonds that were formed in the foundry of their youth are all but unbreakable and still tie them together years after many of them have moved on from the force.

During their time fighting crime with a ruthless zest for justice and control, there were the ones that got away – The Whites (US) of the title – and we meet one of them at Penn Station, stabbed in an early morning attack with no witnesses to tell the tale.

Billy and the gang seem to be on a roll as lots of their whites are meeting their ends, a coincidence that Billy can’t help but look at and try to fathom.

As he tries to put the pieces together, someone out there is threatening the fabric of his world. Threats against his children and incidents with Billy’s father add heat to the situation and Billy knows that whatever is happening, there’s likely to be a messy end arriving any time soon.

The perpetrator of the threats is known to the reader from the off. Milton Ramos has his own crosses to carry. He bears the weight of pain from the murder of his brother and the loss of his wife as he struggles to control his world and hold down his own job as a police officer.

In this novel, Price’s arc is huge. There are thousands of stories here, from tiny vignettes to enormous brush strokes.

As Billy struggles to keep his family safe and tries to understand what is happening to his bunch of blood brothers and sister, he works through regular police work on the night shift. The aftermath of each crime is handled beautifully and each victim or set of survivors is given enough room to nail their life-story to the mast.

The main loops of plot are engaging enough in themselves, but for me the thrill of the book is the way the relationships are built and studied. The interconnections are pillars that hold the plot up rather than it being the other way round.  Price dissects marriages, friendships and families with subtlety and skill that not many can match.

My own favourite strand in all of the complicated interplay is the relationship between Billy and his father. The dad was a much-respected cop in his day, as well as being a lover of poetry. Nowadays, he’s slowly drifting ever deeper into the world of dementia, but in his lucid moments he illuminates the world with his insights, love and wisdom. These sections alone are well worth the price of entry.

Here’s a brief sketch where Billy looks to seek advice about dealing with colleagues who coloured in outside the lines:

‘Johnson’s partner didn’t say anything?’
‘I can’t say what it’s like now, but back then? You looked the other way. Always.’
‘How about the partner, what happened to him?’
The old man was so long in answering that Billy almost repeated the question.
‘Looking back all those years?’ his father finally said. ‘He could’ve been a better father to his kids, maybe a better husband to his wife, but other than that?’ Looking Billy in the eye now. ‘He sleeps like a rock.’

The Whites is terrific. The emotional draw is powerful and there are times when the prose just sings. It’s dark and dreadful and has strong noir elements. It’s one to knock your socks off if you can spare the time.
Posted by Nigel Bird at 22:52