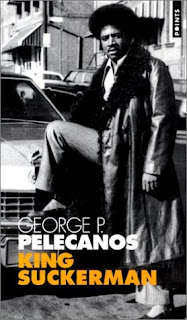 ‘Don’t be wishin’ me no good luck. It’s all luck man. If there’s one thing I learned overseas, that’s it.’

I’m usually a sucker for a Pelecanos. He ranks right up there as one of my favourites. Suckerman (US), however, took a good while to win me over.

It’s a novel that harks back to the nineteen seventies and deals with some cracking modern American themes. There’s a blistering soundtrack, the shadows of Vietnam, guns, drugs, cars, basketball, race, gangsters, movies and loyalty.

The opening is a cold-blooded killing at a drive-in movie. It’s ruthless and exciting and almost too brutal to allow for an early connection with the characters.

From there we meet our protagonists, Greek waster Dimitri Karras and Marcus Clay, who enter into a drugs deal and cross swords with the murderers from the drive in. Things go wrong at the connect and Karras and Clay walk away with a large amount of cash and a gangster’s girlfriend who’s looking for an easier life of getting high and watching TV.

What follows are the inevitable consequences of stealing from a bunch of thugs and an inevitable showdown that is as tense and exciting as they come.

It took me a good while to find my bearings. There are a lot of people to get to know. There’s a lot of information about TV, films, sport and music to digest and I didn’t immediately connect to anyone other than Clay.

At around the mid-point the author began to wind me in. The diverse threads began to tighten into one thick strand. Insights into the lives of Karras and Clay won me over. The consequences of the early crime spill over to hurt the innocent and this allows windows into souls. There are subtle hits like the categorisation of a Hendrix album, the responsibilities of parenthood and the connections and mindsets forged in war. There are even appearances from Nick Stefanos and his grandfather to ice the cake.

By the finale, I was emotionally hooked.

This may not be my favourite book by the author, but I’d recommend it nonetheless. It’s a cut above a hell of a lot of fiction even if it is a little below par.
Posted by Nigel Bird at 11:41