One Man's Opinion: THE LAWYER: SIX GUNS AT SUNDOWN by ERIC BEETNER 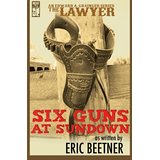 ‘There was a time when The Lawyer would have said no man deserved to die in the dirt. That time had long past.’

The Lawyer was once a good man who did his work with the law on his side. Following on from the murder of his family he’s still a good man, only now he’s prepared to use different tools to find justice.

He’s on the trail of Big Jim Kimbrough and winds up in a town called Sundown. While there he is horrified by an act of barbarity carried out by local bully Buchanan who drags a local black man into town to be hung because he’s stolen a slice of pie. The Lawyer can’t tolerate this and steps in to try and alter the planned course of events. Unfortunately, Buchanan has the backing of twisted minds and those who rely on him for employment. Intervention means going up against practically the whole town.

With only one ally, The Lawyer draws his line in the sand and becomes the target of the deranged mob that doesn’t appreciate his set of values.

The Lawyer: Six Guns At Sundown (US) is a quick and enthralling read. The usual Western props are present in abundance and the action is delivered with the tension and pace that you can confidently expect in a story by Eric Beetner. Themes of the underdog against the hoard and of the just against the brutes may be commonplace, but the element of racism that forms a key platform for the tale brings an extra dimension that is compelling and offers a reminder that though things have changed, there’s still a way to go.
Posted by Nigel Bird at 10:11