One Man's Opinion: THE FEVER by MEGAN ABBOTT 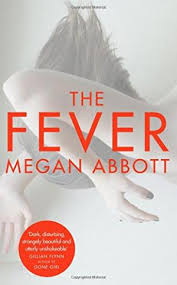 “You spend a long time waiting for life to start – her past year or two filled with all these firsts, everything new and terrifying and significant – and then it does start and you realise that it isn’t what you’d expected, or asked for.”

While reading The Fever (US) by Megan Abbott, my world felt very brittle. The foundations of life seemed egg-shell thin as the book eroded them layer by layer. It’s not an easy thing to explain - you’ll have to read it to fully understand - but being the father of a teenage daughter with two other children fast approaching their adolescent years means that this story hit close to home. It made me all too aware of shifts I can already sense taking place underneath the surface, many of them I’d rather ignore.

In this novel, a group of friends is devastated when one of them has a serious fit in a very public place. Word travels fast via the super-highway of social media and panic sets in around her school. The effects are magnified when another of the group has a fit as this opens speculation about what might be going on. There are fears that a vaccine might be to blame or that there’s a sexually transmitted disease doing the rounds. Others worry that it might be related to the old lake where swimming is now forbidden and around which legends swirl like mist. The public health board get involved, but their covert investigation only serves to add fuel to the fire.

Deenie is left in a vulnerable position. The dynamics of her group have already been evolving in ways she can’t control and she is painfully aware that something has gone from her life forever. Her encounters with sex have raised questions and doubts as much as they have introduced new pleasures to life. The tension behind these developments built well and, even though I couldn’t fully grasp the hysteria portrayed within the school community, I was thrilled and drawn in as the story unfolded.

This one is told from the points of view of Deenie, her brother and father, which allows us to see the situation from a range of perspectives. Particularly powerful for me was the father’s angle. He’s spent his life devoted to his children and at this critical stage it seems like he’s lost them. The past has gone and so has their need for him to be at the centre of their worlds. He’s battered by the conflicting needs to protect them and to leave them to work things out for themselves. He wants so much to do the right thing when the very concept barely exists any more.

There’s also a plenty of power in the portrayal of the young adults as the rug is pulled from under them and they try to make sense of a world that is constantly moving.

The Fever is an unsettling work. Abbott dissects the character with the scalpel-sharp precision of an anatomist. It’s amazing that she can portray so effectively the mix of excitement and pain involved in growing up from a young woman’s perspective, but more impressive that she can so naturally inhabit the personas of a teenage male and middle-aged man. It’s a beautifully written story that has a satisfying twist to help tie everything up and I’d like to recommend this one to the house.