One Man's Opinion: THE SLAUGHTER MAN by TONY PARSONS 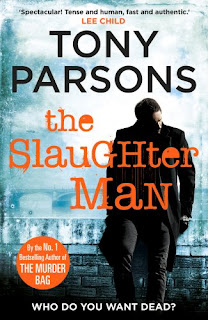 I started reading April Skies (US) by Ian Ayris yesterday.  It’s the follow up to the incredible Abide With Me. Published by Caffeine Nights, it’s available for pre-order just now and will get its full release tomorrow. So far it’s delicious and I’m so glad to be lost in a world created by Ayris again. The voices be creates are really stunning and very original. Check it out.

I also noticed that the second book in my Southsiders series is also up for pre-order and is due for release this Friday. It’s published by Blasted Heath and it’s called Southsiders: Jailhouse Rock.  It’s currently available at for £1.59 here in the UK ($2.99 in the US). I don’t know what the pricing plans are, but from experience I’d say that the price is likely to rise in the near future. If you started the journey with Jesse Garon, I hope you’ll tag along for the next episode in his life.

And so to TheSlaughter Man (US)by Tony Parsons.  It’s the second in the DC Max Wolfe series.

I read the first, The Murder Bag, and wrote quite a long review for that one. In some ways, I feel I could duplicate that and could save myself some effort.

The Slaughter Man opens with the brutal and sinister murder of a wealthy family. It’s very dark and immediately engaging. The incident throws up several points of interest: the weapon used by the killer is a cattle stunner used in the slaughter house; the youngest of the children is not among the dead and his whereabouts are unknown; the family are wrapped in immense wealth, happiness and minor celebrity. These elements lead to an interesting case with lots of twists and turns.

Max Wolfe is an engaging character. I do rather like his approach and his attitude. He and his team delve into the world of the rich, a community of travellers and a world of prostitution and sex slavery. The contrast between each area is of interest and put together well.

Where the book falls down for me, just like in the opening novel in the series, is in the jarring extras that distract from the pace of the story. It may well be that for many readers this hasn’t been an issue. For me, it’s a major flaw. Once I was aware of it, each occurrence had me vexed. There are countless explanations of the roles within the police force and their procedures. Each acronym is explained in more detail than is necessary. There are many examples of research clogging up the development of the drama – the research is there for all to see and it would be more appropriate in a London guide book than in this novel. The visits to the Black Museum feel tired now that they’re so frequent (and provide more of the research chunks that cause obstruction). There are also a few too many coincidences in this world for my liking.

My feeling is that there’s a really good book hiding in here. That the series could go on to be something special if a talented and experienced editor were put onto the job. The reason I think this is that there was enough in the character for me to return for book two and I did find the investigation to be compelling and very entertaining. There are also some very nicely handled resolutions that are emotional and also satisfying.

It’s rare for me to have such mixed feelings about a story and I’d be interested to hear if these thoughts resonate with you.

My overriding reaction is that I’m glad I’ve been on the journey so far and that I’m unlikely to follow Max into his next investigation unless I see some reviews that persuade me otherwise.

Good, but definitely not great.
Posted by Nigel Bird at 13:22