One Man's Opinion: OF MICE AND MEN by JOHN STEINBECK 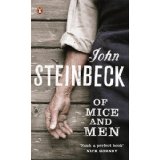 “Books ain’t no good. A guy needs somebody – to be near him.”

I’m not a great one for re-reading books. When it comes to weighing up visiting a place I’ve already been or visiting somewhere fresh, it’s the new pastures that usually win out. Maybe that’s a balance I need to adjust, however. Going back to this Steinbeck was a wonderful experience that was just as full and emotional as it was around thirty-odd years ago. In some ways it was richer because of the miles I’ve collected on my clock simply by hanging around. I’m not really sure, for example, that I fully understood the idea of Curley’s ‘glove fulla vaseline’ and his need for a soft hand at my first visit.

I came back to Of Mice And Men (US) after enjoying Blaze by Stephen King. The jump from one to the next was the obvious path to take and I decided to follow the signs.

Of Mice And Men is so well known that I’m not sure I can add anything to the weight of opinion and thought that already surrounds it. A couple of migrant workers, George and Lennie, stumble into the book to take rest down by a pool frequented by tramps. Lennie’s a gentle giant on the surface, but he’s also prone to losing control. George is his companion, a worldly-wise and weary soul who keeps everything straight and makes sure Lennie can survive in a cruel and difficult world. They go to work on a ranch and it becomes immediately clear that there are going to be problems between the boss and the incomers, if for no other reason than that’s the way the power within the economics works.

What unfolds is one of the juiciest and most perfect tales I can imagine being told. Better still, it’s all contained within around a hundred pages - for a lazy reader like me, that’s a blessing. The fact that such a huge piece is done in such a small space is a testament to the quality of the writing and the concept. There’s nothing there that doesn’t need to be and that’s a real strength.

This book had me from the start. The seeds of menace and doubt are sewn in the first few pages. The sense of foreboding grows with each passage. As the tension builds, the feeling of warmth and love of the central pair grows. The tension notches up because the more you want everything to turn out right, the less likely it seems that there can be any positive outcome. Ordinarily, that might be considered to be a spoiler. Not so here because Steinbeck keeps telling you what’s coming. He marks the way at every step and this makes the prospect of the end increasingly unbearable. It was so effective in my reading that I almost couldn’t finish. The impending heartbreak was as much as I could bear. I did make it to the final page, however, and the power of the finale is stunning no matter how inevitable it has become. I was drained when I closed the book. Sad as hell and totally satisfied.

It struck me that Steinbeck really does cultivate the story. He starts things small and builds them up. Take the theme of Lennie’s love of softness. First come the mice and then we grow to pups, girls and then to Curley’s wife. They’re all part of the same desire; it’s just that the manifestations simply lead to different consequences.

The book’s jam-packed with aspects of being human. There’s love, obsession, corruption, injustice, friendship, loyalty, history and hope. I don’t want anything else from a book that this, for what else could there be? Total noir!

For me, I hope this is a lesson learned. Those books I loved many years ago, they still need attention and it’s about time I gave them some.

Post Script - Of Mice And Men has 35 one star reviews on Amazon UK. Having gathered a few of them for my own work, I find this immensely reassuring.
Posted by Nigel Bird at 10:31