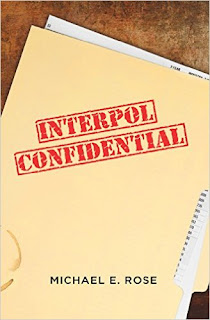 Michael, the first question has to be why would a thriller writer with three solid successes under his belt and a growing reputation decide to switch to satire?

Well, it’s not just any old satire. It’s a satire about Interpol, so it’s still very much in the world of police and crime fighting and deception and double-crosses. So I guess it’s not all that far removed from the sort of world where my Frank Delaney character operates in the thrillers, really. And remember that because this is a satire about Interpol, just the name, the very word Interpol, breathes intrigue and mystery.

Sure, but why satire? Why not write a thriller about Interpol, involving Interpol agents?

In fact I referred a fair bit to Interpol in my last thriller and had a couple of Interpol characters in that one, The Tsunami File, so I could see clearly the potential for stories and characters drawn from Interpol. But to answer your question…. because I worked at Interpol myself, and was so immersed in that organisation, I just thought that in a number of ways the best way to tell the Interpol story was through satire. After my experiences there I wanted to give a sense of the craziness of it all, the intensity of the way that place works, and all major police organizations, really, the way they do crucially important work but get caught up too in personalities and politics and ambition and, not to put too fine a point on it, straight-out human craziness.

So this could have been a satire about, what, the FBI or the NYPD or Scotland Yard, just as easily?

Exactly. Yes. It just happens that I worked at Interpol after I left journalism, that’s what I knew for a while and I wanted to have some fun with it. The thrillers are what I want to do, of course, they’re my main interest as a writer, and there’s a fourth one in the series underway, but as a breather I wanted to explore the absurd side of police work and, really, of any big organization, police or otherwise.

Even so, you’re saying all the really hilarious, wild, absurd stuff in Interpol Confidential (US, CAN) is based on real events, real people?

Well, any writer, whether a satirist or a thriller writer or a writer in any genre, bases his or her stories on experiences and situations and characters they have encountered along the way. But we build on those and mould them and change them to suit the story we want to tell. And if it’s a humorous story, then of course you can go even further and really pump it up.

Some of it is really off the wall. You can’t have made all this up.

It’s stuff that anyone who’s worked in a bureaucracy can tell you about, and maybe more, I’d say, anyone who has worked in a big police bureaucracy. And, yes, some characters display some of the traits of people I’ve met or worked with, and not just at Interpol. In newsrooms when I worked as a journalist. In universities, when I was teaching. There are strange, idiosyncratic, flawed, amusing people, and therefore potential fictional characters, everywhere for the taking.

But the character of the Interpol Secretary General, for example. Who inspired that guy?
There are some people saying he is very, very like the disgraced former head of the International Monetary Fund, Dominique Strauss-Kahn. Really ambitious, flawed, a schemer, a philanderer. And from a French bureaucracy background. Sounds an awful lot like your Didier Herriot-Dupont character, right down to the double-barreled last name.

I’ve never had the pleasure of meeting Mr Strauss-Kahn. I wouldn’t have the faintest idea what you're talking about.

I couldn’t possibly comment. “Any resemblance to actual persons, living or dead, is entirely coincidental”. That’s what it says at the front of my book.

That’s what they all say. So, is Interpol a serious organization, despite the fun you’re poking at it? You worked there…

Look, these days, in an increasingly interconnected world, especially in the world of police and intelligence and security work, you absolutely need an organization like Interpol. Absolutely. And there are some exceptionally good police officers working at that headquarters building in France, really fine police from all over the world doing important work. But is everyone like that? Are there no problems and failures and mix-ups and messes? Are there no strange or inept people in there? Of course that’s impossible. Just as it’s impossible in any big organization, police or not police. It always gets down to people, and people screw up, they get themselves into trouble, they try to hide their mistakes, and all this is a wonderful source for satire. 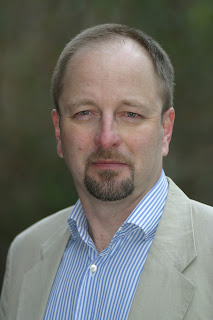 I learned a lot about Interpol through the book. Was that your aim too? To tell your readers more about this mysterious organization?

Yes, indeed. I hope people will finish the book feeling they’ve had a peek inside the place. It’s just that taking a peek inside any police organization, even any local police station, will have its funny side. So I tell at least a part of the Interpol story, but I do it through humour and a lot of made-up stuff. I had a lot of fun writing it, I really let myself go. I hope people will have fun reading it.

A make-believe Interpol, then.

If Interpol didn’t exist, someone would have to invent it. Didn’t someone say that once?

I think that was about God. If God didn’t exist…

And now you’ve had some fun, it’s back to writing thrillers.

Yes, absolutely. My Frank Delaney character is itching to get back in the game.

Michael E. Rose is a Canadian author, journalist and broadcaster. He is also the former Chief of Communications for Interpol at the agency’s global headquarters in Lyon, France. His usual genre is spy thrillers, with the Frank Delaney series winning new readers year after year. The first thriller in that series, The Mazovia Legacy, won critical acclaim and was shortlisted in the prestigious Arthur Ellis Awards for Best First Novel. The second volume, The Burma Effect, drew similar attention. The third, The Tsunami File, was shortlisted in the Arthur Ellis Awards for Best Crime
Novel of 2009.