THAT WAS THEN, THIS IS NOW 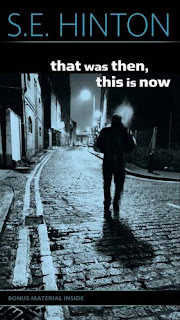 “The Socs were trying to look poor. They wore old jeans and shirts with the shirttails out, just like the greasers always had because they couldn’t afford anything else. I’ll tell you one thing, though: what with fringed leather vests and Levis with classy-store labels in them, those kids were spending as much money to look poor as they used to to look rich.”

I’d been saving That Was Then, This Is Now to read on a rainy day. Not a day when it rained on the outside, but when I needed a lift. I finally opened the cover last weekend on a train journey down to see my dad. Returning to the place where I did my own growing up made it an appropriate choice and it was definitely the right one. Truth be told, I reckon any day’s a good day for reading a book by SE Hinton.

Bryon and Mark have lived together since Mark’s parents killed each other. They’ve become like brothers. They get a buzz from girls, pool hustling, joyriding and fighting. The world is ripe with possibility and yet limited by their social status and environment. We get to know them at a time when things are changing. Nothing is quite the way it was. Everything seems more serious and many of the activities that were fun for them once have become dull. At the same time as life becomes rich and thrilling, the cracks appear everywhere.

Tough things happen. Their part of town is brutal. Without going into huge detail, the book managed to capture hard and mean moments in a very satisfying way. Each episode grabs the senses and forces you to pay attention.

I can’t put my finger on why exactly I found this read to be so moving and absorbing, especially when it’s aimed at young-adults and when the prose is so straightforward.
It might be that it does such an excellent job of capturing a moment of change, a watershed between one life and another. To me, it doesn’t just speak of the movement from teenager to young adulthood, but holds a mirror up to all the times in life when skins are shed. It carries the weight of nostalgia, a hint of resignation and an unsteady optimism for things to come.

It could also be that the strength of the characters and their relationships are a key to this novel’s power. The first person narration brings and intensity of feeling that works superbly. What Hinton does for me is to reach inside. She allows me to feel something more than empathy. It’s almost as though she’s creating a new identity for me as I read. A new history. That depth is not even pinned down to one person, but to all the central figures in the story.

The tone and structure also work with ease. The voice is reflective and yet in the moment. All the life and times that are building up come with a warning early on that they won’t last forever. Something’s going to shake their world to the core and that tension slowly burns from beginning to end while we await the final nail in the coffin to be smacked home.

Hinton writes in a very simple way. The sentences are never complex and the language is often plain. That said, she creates distilled phrases that deliver an emotional punch incredibly well (‘Nothing can wear you out like caring about people.’). These moments are the jewels in the crown for me, the points at which she tells it all with a slight action or subtle reference.


All in all, this was just the treat I’d been hoping for. It’s the kind of book that I hope rubs off somewhere in my own writing style and if I ever get to put out a novel that’s half as good as this, I’ll be a very happy man.