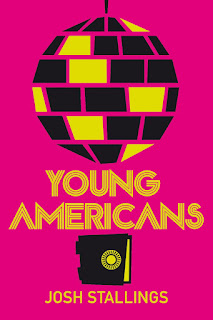 “When he wasn’t on a losing streak and moody, he was a great guy.”

When Josh Stallings brings out something new, it’s an exciting event. It’s like the interesting shaped parcel under the Christmas tree – you can’t wait to open it and have no idea what’s going to be inside.

What’s inside Young Americans (US) is a fun tale about a heist set in the middle of the 1970s. Not that it’s a straightforward story with predictable characters – it’s anything but.

Sam is a young woman who was taught to crack safes at an early age by her father. She gets involved in a drugs deal that goes wrong and is held accountable for the mess. The only way she can make amends and keep herself alive is to rob a nightclub that happens to be owned by a member of the mob.

In spite of the close attention of the local cop, she collects together members of her old crew, her brother and a few new flamboyant and varied players to help her out on the job.

There’s a tense build up to the heist and an even more dramatic escape.

Suffice to say things don’t go well and Sam and her family find themselves in a position where everybody literally wants a piece or two of them.

Bubbling under this are intertwined relationships of different kinds that are built on strong loyalties. This means none of the ways forward are simple.

The setting is really special. It would be great to get into that time machine and zoom back to the era and the location. There are drugs and sparkles and almost anything goes. Stallings does a good job of bringing that disco world to life and opens each chapter with a cool and apt quote to get things rolling.

For my taste the book is a little heavy on dialogue, but that is often redeemed by the use of an extensive range of monumental slang and similes that only a really cool-as-hell dude would be able to find.

This one’s for the crime reader who likes material to be multi-faceted and to stray beyond the boundaries of the main action.