One Man's Opinion: YOU DON'T EXIST by PABLO D'STAIR and CHRIS RHATIGAN 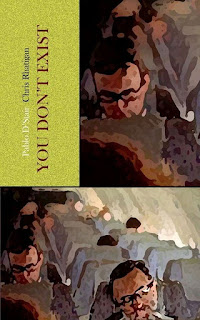 “Some people don’t know how to measure a good day. But Pullman had a clear system – the fewer people he interacted with, the better. His ideal day would be zero interaction with anyone.”

You Don’t Exist (US) brings together two novellas by a couple of very talented individuals. They have common themes and share something in terms of style, which means this is a strong marriage and a successful one.

Both stories concern the finding of money. In the first, Bleed The Ghost Empty, the protagonist stumbles into a load of cash that just happens to be in the car of a murdered individual. In the second, Pessimist, a much larger, life-changing, amount of cash is picked up by Pullman at the baggage collection of the airport (‘more like a bus stop’) in Moline.

You’d think that the finders would be celebrating, all this free money at their fingertips, only that wouldn’t make a very interesting story. Instead, both men feel the weight of paranoia upon them. They begin to question everything. Need to work out all the angles so they can keep themselves safe. They become so entrenched in their need to study all of their actions that even the simple decisions carry a new meaning.

D’Stair’s character is escaping from a broken life. His mind is already pumped full of adrenaline and insecurity as he passes through places that barely seem to exist. When he has to stop to fill his car with fuel, he makes his discovery and begins to unravel as his thoughts go into overdrive. In a very good way, this is typical of the author’s work. He worms his way into the present and finds an anxiety and pointlessness that borders on horror even in the smallest detail.

Pullman, is a different creature. He is drawn to study his whole life and the prison of work and earning has created for him. The worst part of it all is that he’s become totally institutionalised in the consumer way of being and the prospect of liberation from it seems like a nightmare. This one’s more directly challenging to the reader, I think. It points the finger and asks about values and experiences and purpose all the way through – Pullman is a kind of cracked mirror that you are forced to look into and the reflection isn’t going to let you off the hook easily.

I really enjoyed these stories because they, perversely, made me feel incredibly uneasy and uncomfortable from the start. They plough through the present like razors through flesh and that unflinching attention to the moment is often very disturbing.
This is seriously good writing in a form that’s not likely to burst into the mainstream any time soon. Even so, I hope that this review will help it get into a few more hands so that it begins to gather some of the momentum it deserves. Whilst recommending this read, might I also suggest that you don’t tackle it when you’re feeling very alone and that you keep your own personal crutches (smokes, beers, whisky et al) very close to hand.

Another belter from All Due Respect books.
Posted by Nigel Bird at 11:47