One Man's Opinion: ANGELS OF THE NORTH by RAY BANKS 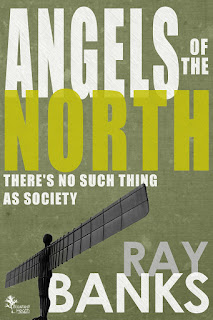 ‘A soldier between wars was like a chimney in the summer.’


Ever wondered what might have happened if the plane in Lord Of The Flies had crashed on an estate in Gateshead in the middle of the 1980s? I reckon Ray Banks has. But that's possibly another story.

At the start of Angels Of The North, Joe’s coming home from the army. He takes a cab. The driver is Gav. They happen to live on the same street and get talking, or at least Gav does. Has Joe heard the one about Brian who was done over when he stood up to the drug pedlars in the end house? Wasn’t he brave and isn’t it a shame that nobody helped the guy out? What on earth is the county coming to?

Life on their estate is a mess. The neighbours live under the enormous clouds of poverty, hopelessness and a constant racket from the junky house. It’s a symptom of the collapse of a once thriving industrial district, where community and joint effort have been replaced by inertia and a sense of failure.  Further afield, the broader context is of individuals trying to make good while being prepared to step on anybody to get along and economic success is seen as the only success.

Gav and Joe decide to do something about their hell. They set about taking on the scum at the end of the road and it’s not long before their underground movement turn to violence. As with any movement, however, there are political differences and conflicts that cause breakdown and reformation as some rise and some fall.

There are many conflicts in this book. There is the community against drug culture; there are the machinations at the local taxi firm; there are families where blood ties aren’t enough to provide the glue they need; there are the internal battles of individuals who struggle to find equilibrium; there are fights in the business world; and there are the tussles with the world as people just to try and stay afloat.

The scope of this novel, though centred upon the three main players, is enormous. The protagonists are like particles in the Hadron Collider who bang into each other with such velocity and power that they create black holes and big bangs all over the place. They suck those around them into unstable orbits that put them at risk in a variety of ways. Among the things I loved about them was the way my levels of sympathy for each never stayed the same. They all have some redeeming features if you loosen the usual parameters a little, they’re all doing their best in extreme conditions and they’re all totally ruthless and misguided in different ways. My loyalties shifted regularly until the author finally played a few trump cards and allowed me to nail my colours to the mast.

This is a brutal book that speaks about a dark and troubled time that will be ever present as long as there are people on the planet. It doesn’t hold back in any way and, in that sense, if feels totally honest. Ray Banks hasn’t compromised at any point. He’s not ducked out of any of the big issues by diluting his work to suit a conservative audience. He’s not avoided peeling back the layers of humanity to leave a warts-and-all package. There are no contrived plot-twists and the developments feel organic and natural. This honesty serves to make the story all the stronger.

If that weren’t enough, Angels Of The North (US)is written with a terrific style and voice. Best of all for this reader is the quality of the simile and of the amazing descriptive powers on show, for this is another area where I reckon Ray Banks truly excels.

Add to all of that a subtle humour and a great rhythm to the dialogue and you have yourself something rather special.

Buy this one. Tuck it away on your shelf or your e-reader until you’re ready for a serious read. Get it out whenever you feel you’ve fallen into a rut with your habits or you find you’ve tired of the flimsy, the formulaic or the easy ride.
Posted by Nigel Bird at 13:35