One Man's Opinion: GHOST IN THE MACHINE by ED JAMES 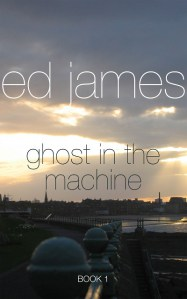 Facebook has a competitor. It's called Schoolbook and it hooks up old friends. It also leaves some of those friends dead.
Ghost In The Machine (US) opens with a blind date that ends in the murder of a young mother in an Edinburgh hotel. This sets off a chain of events that unfolds and brings in Scott Cullen, a detective who is new to me and who brings a wonderful energy to the world of the police procedural.
Cullen’s good at his job and is keen to do what is right. That’s not always as easy as it might be, given that his bosses are playing political games and looking after their reputations, while his juniors are often rather incompetent.


As he battles against the lack of imagination of his seniors, Cullen moves off on tangents by following a mix of instinct and logic. It’s a good job he does, too, even if it does get him into hot water with the powers that be. The thing is, he’s the one with the handle on the case and he’s the only one likely to come up with the right result.


I really enjoyed this one. The setting is colourful and the characters well put together. The process of Cullen’s investigation into technologies using ultra-modern techniques is fascinating and well-explained. The pace of the story is terrific and the plot really accelerates from the off. There are plot-twists that came totally unexpectedly for me, yet made complete sense once the pieces of the puzzle were put together. There’s also enough in Cullen’s personal life and general manner to make him a pleasure to get to know.


Most interestingly for me was the style of the book. To me it goes against the writing rules I often read about and discuss, namely in the way that it tells the tale almost entirely through dialogue. It’s a great example of how to buck the norm; in so doing, James creates something that feels fresh and exciting. It helps that he uses strong differentiation between the voices of the characters, whether that be through accent, manner or phrasing. This rhythm adds to the style and pace of the work and helped this reader to shift through the gears with perfect ease.


It’s fair to say that I was bolting along as the climax played out. I was totally hooked and had been from pretty early on. This is a bonus as it helped me save on battery life on my TV remote control, the telly being switched off for the past few days to make way for the real action.


Recommended to anyone who likes a solid police story. I’ll definitely be reading more in the series.
Posted by Nigel Bird at 23:08