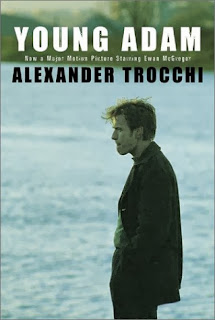 Joe has had many surnames. He changes them as he drifts from one place to the next, but always keeps his first name so that he’ll never be caught out.


When we meet him, he’s working on a barge and moving across Scotland shifting goods between Edinburgh and Glasgow. In a sense, it recalls a time when the industrial landscape and transport networks were changing enough for this to be at the end of an era.


At the opening of the book, Joe and his boss Leslie are fishing the bloated corpse of a woman out of the canal. What intrigues the police about their discovery is the fact that the girl is wearing nothing but her underwear and therefore they feel the need to investigate further.


The discovery of the body ignites a lust in Joe for Leslie’s wife and it’s not long before they are having an active affair that only seems to lack romance.


Eventually Joe, the narrator, explains how all the pieces of the jigsaw fit together, all the way up to the court case where justice is to be seen to be served.


It’s a very good read. The prose flows and the surprises are introduced extremely well. The plot is well drawn out and the subject is always fascinating.


In some ways, the narrative has a cold feel. The characters are really well rounded, each sharing the common feature of being human. They create difficult situations and respond to cause with resignation, moving on from one life to another as others impact on their homes, relationships and economic circumstances.  Much of the changes are matter of fact, as is the sex and the murder of a young woman.


There’s also a growing guilt in Joe that he discusses openly as he considers how he might move forward in life, summing up all the possible consequences and then deciding to take on the one that seems to suit him best at the time.


It’s a powerful, short read and I recommend it to the house.
Young Adam

A little aside. If you're interested in trying your luck for a copy of Sweetheart via the Goodreads Giveaway, you still have time (but not much).