One Man's Opinion: A PLAGUE OF CROWS by DOUGLAS LINDSAY 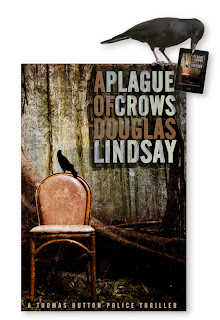 This is my first Hutton novel, but not my first Doug Lindsay book – that pleasure went to his most excellent creation, Barney Thomson.


For those of you who have read the work from the Barney series (and if you haven’t you should), you’ll be aware of the amazing shades of darkness that Lindsay can create as well as the tremendous use of humour and character that are as much part of the sandwich as the butter and the bread.


What’s different about the Hutton story in ‘A PlagueOf Crows’ is that it exists in the more mainstream world of the police procedural, not that it’s an entirely conventional setting.


For the fans of the police detective and the ins and outs of the process of finding a killer, there’s plenty here that will satisfy the appetite. There’s also a huge amount more that is likely to leave fans of the genre expecting something extra from their next choice, simply because of the extra layers and dimensions Lindsay offers.


Hutton has been rediscovering himself after a suspension from the force, a suspension brought on by his super-strong sexual desire, his lack of care for what others think about him, his love of danger and his hard-as-nails fists. He’s spent his time in a tent in the Scottish countryside and has reached a place of inner-peace, giving up the women, the cigarettes and the booze. When he’s called back into operation to help out on a very particular case, it’s inevitable that he’s going to find his way back to his old habits and that things will spiral out of control. Him being an ex-war journalist who has seen plenty, it’s also easy to find some sympathy with him for his unabridged behaviours.


The thing is, the case is hugely different to most you’ll come across. More macabre and intelligent than the majority of those you’ll find in other novels. It involves woodland and crows, saws and cement and a very particular kind of psychopath.  I’d tell you more, but think you should find out for yourself. I found it hilarious and disturbing in equal measure – the humour of the situation seems to magnify the power of the crime and to allow for such barbarity to become palatable.


In terms of the plot, the journey is one you should take for yourselves. What I can offer here is to suggest that you’re likely to fall completely for the first-person voice that has no frontal-lobe editing and moulding phrases and thoughts into the politically correct. His ideas might have had me cringing, but also got me laughing at the way he seems able to say things with elements to which I couldn’t help identify (damn). There are lots of laughs, but that doesn’t mean this book doesn’t have a deeper thrust. There’s also the tension and mystery that you’d want from any book. It leaves plenty to be thought about and should take enough hold that you’ll likely to have with you for a good while after finishing; the book’s still with me and I can imagine I’ll have it lurking around for a good while yet.


This novel emphases my notion that Douglas Lindsay is a fine Scottish export that should be hailed in the same way as whisky, Rankin, haggis, tartan and those Jimmy hats that you can pick up from the Royal Mile.


Super stuff.
What's more, if you're quick off the mark, you'll get this one at a special, introductory price from Amazon (US)
Posted by Nigel Bird at 14:09