When The Protectors Need Protecting 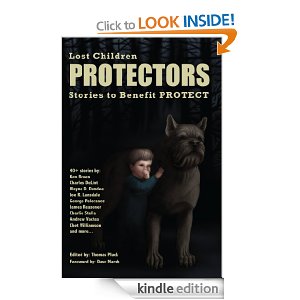 I hope you caught Thomas Pluck’s excellent piece on how he put together ‘Protectors – Stories To Benefit Protect' yesterday.  It demonstrates the hard work and commitment of the editor and I take my hat off to him for what he’s achieved.


I wanted to support the collection by writing about why I wrote the story – Patti Abbott has opened the doors to her blog with her ever-flowing generosity – and I’d have sent her something had I not just done the very thing for Both Barrels.


Instead of taking up Patti’s space, I thought I’d write it here at home instead.


My story in ‘Protectors’ is called ‘Baby’s In Blue’ and in many ways it came very differently to others I’ve written.  In some ways, I needed protecting from my own creation as I put it together as I felt extremely uncomfortable as I worked.


The starting point is something that really happened, much as I wish it hadn’t.


Several years ago now, a young woman collected a severely-disabled girl from her family to give them respite care.  At some point in the evening, the carer wrapped up the child in a blanket and left her outside in her wheelchair and then went into a party.


It must have been one hell of a party, too.


When the taxi turned up to take the child to school the next day, she wasn’t there.  She was found where she’d been left the night before almost dead after sitting through temperatures that dipped below zero.


That such things can happen beggars belief.


I guess I wondered just how good something would have to be to make someone forget that kind of responsibility.  The lure of alcohol or drugs and the distractions of love and sex can be mighty powerful, I suppose, but I couldn’t find it in me to sympathise at any level.


That forged the ending of ‘Baby’s In Blue’.  I wanted to use the situation, but in a different way.


To fuse things together and to create the necessary baby of the title, I got to thinking about fertility clinics.  The money people spend to conceive a child.  Surely there must be loads of folk out there doing it in unorthodox ways in order to overcome the problems on the cheap.


And then I imagined what it might be like for such a man to see his son being brought up by a couple of women.  Wouldn’t he think about adding a little male influence on the child in the interest of balance?


Which is where I was.


I use the words ‘character I created’ back there quite deliberately.


Ordinarily, I wouldn’t claim responsibility – it’s as if they’re already formed in some way when they arrive.


This time, however, I was manipulating the people in the story like a puppeteer.


There was a major consequence to this.  As I was the one pulling the strings, I was also the one leading the situation to its terrible conclusion.  Instead of playing God, I was playing the devil.


For one of the few times in my experience as a writer, I felt damaged by the ideas and the acts of the story.  There was a burden to it.  A dark mass to be carried on the inside.   It was a rough and unpleasant thing to go through and I could only let go of the negative thoughts when the last full-stop was put in place.  In some ways an explanation mark might have felt safer, or putting the laptop behind bars.


I think it holds a great darkness in spite of some of the humour and the attempted lightness of tone.


When I sent it to TP, I was really worried that he’d never speak to me again once he saw what I’d done (for that’s how it felt – like I’d done it).


TP, gracious as ever, accepted the story and even embraced it as part of the collection.  That made me proud I can tell you.


There was also another feeling about the story.  If I’d felt such a revulsion during the process, did it mean that it was something special?  A work not even from my top drawer but from some secret cupboard somewhere?


Should you get there, and I recommend that you at least buy the book (it’s to help the vulnerable, after all), maybe you’ll check it out and let me know.


Thanks again, TP, for all your hard work and dedication.  I shan’t be forgetting it any time soon.