Dancing With Myself: KENT WESTMORELAND 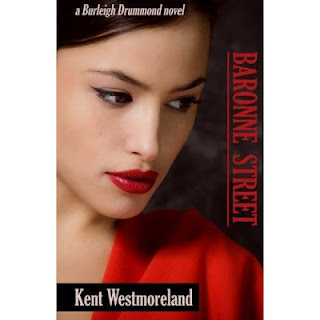 Sea Minor:  For those unfamiliar with your novel BARONNE STREET briefly describe it.

Kent Westmoreland: The protagonist is Burleigh Drummond.  Twenty-eight year old Drummond is the fixer New Orleans bluebloods and politicians run to when their problems become too complicated for their titanium-hearted lawyers.

In BARONNE STREET Drummond must employ his Machiavellian skills to solve and avenge the brutal rape and murder of Coco Robichaux, an ex-girlfriend.  As Drummond investigates, he discovers Coco lived a clandestine existence in the city’s netherworld and had been drafted as an unwitting pawn in a plot to disrupt the upcoming mayoral election.  As often happens with pawns, she was sacrificed.

ea Minor: BARONNE STREET and Drummond seem to be a throw-back to Dashiell Hammett and Raymond Chandler.   That’s assuming Hammett and Chandler stories had been published in modern day magazines like FHM, Esquire, and Details rather than Black mask and Dime Detective.

Kent Westmoreland: When I created Burleigh Drummond I wanted him to be a contemporary Phillip Marlowe - cool, a great wisecracker, and obsessed with the truth while seeming not to care, but haunted by his inability to make things right in an imperfect world.

However, contemporary doesn’t mean setting the stories in the present and handing him a smart phone.  My concerns with Marlowe and his followers were they middle-aged, financially unsuccessful, angry, and alcoholics or near alcoholics.  I made Drummond a fixer rather than a detective because it is a dubious job that would pay well.  He’s not angry, but does suffer from a troublesome malaise because of the corruption and dysfunction he not only sees but participates in.    Drummond does drink a lot, but because he’s young man on the prowl for female companionship.

Sea Minor: I see the DNA of other fictional detectives in Drummond.

Kent Westmoreland:  Those guys would be James West from the classic TV series The Wild, Wild West and Sherlock Holmes.

What I always loved about James West is wherever he went people said “There’s James West, secret agent for the Secret Service.”  It was so absurd.  But I realized this would happen to Burleigh Drummond since he operates in a small city which only has three degrees of separation as opposed to the standard six.  So I worked that concept into the stories.  He seldom engages anyone who doesn’t know him or know of him. In one of the short stories a police detective mentions Drummond’s clients consider it a status symbol to say “Burleigh Drummond is fixing the situation for me.”

Until the BBC series Sherlock, Holmes and Dr. Watson typically have been portrayed as middle-aged or older.  Holmes was twenty seven or twenty-eight when he met Dr. Watson and Watson began chronicling their adventures.  Watson was few years older; in addition to being a physician Watson was an ex-military man who missed the excitement of war.

Also more often than not Holmes’ clients were wealthy blokes and government officials asking him to fix a situation for them (italics mine).


BARONNE STREET begins when Drummond is twenty-eight and has been working as a fixer for three years. His best friend and occasional partner, Morgan Cross, is obviously ex-intelligence, though it is never explicitly stated. Like Watson, Cross knows his way around guns, death, and boredom.

Sea Minor: One of the most fascinating characters in BARONNE STREET is Evan Charbonnet, a gay crime lord who controls the French Quarter.  I haven’t come across a concept like this in other novels.   Why did you create Charbonnet and his lavender mafia?

Kent Westmoreland:  New Orleans has a large gay community which exerts considerable influence on the city.  For a novel about New Orleans to be authentic that influence must be included.  I have read several New Orleans based novels where token gay characters exist, but they’re cyphers; they serve no other purpose other than to have gay character.  In BARONNE STREET (and the short story “Price Tag Attached”) I have created major gay characters and who are key to moving the plot forward.

Also gay characters play subtle, but important roles, in Chandler’s novels: The Big Sleep, Farewell, My Lovely, and The Long Good-Bye and Hammet’s The Glass Key.   The Maltese Falcon’s trio of gay criminals is more obvious and important to the plot.  So my gay crime organization is homage to Hammett and Chandler; I’ve taken the idea to the next level.

I discuss this subject in this incredibly amateurish video .

Sea Minor:  Does a person like Charbonnet or a gay crime organization exist in New Orleans?

Kent Westmoreland:  Some of the sleazier strip clubs in town are reputed to be clandestine brothels where drugs are easily available.  They are owned by a gay business man.  Assuming those innuendos are true, the owner would have to have very strong ties to politicians, the police, and the criminal element.  Let’s say I took the prevailing gossip and ran with it.

The earliest two “A Relatively Small Sum of Money” and “Part of the Plan” are set prior to BARONNE STREET.  In Small Sum Drummond is hired to look for a missing heiress, but instructed to “not look too hard”.  What he finds is a scheme to defraud the missing heiress; being Burleigh Drummond he doesn’t let that happen.   Plan is more of a caper; it follows Drummond as he manipulates a failed justice system that allowed someone complicit in a child’s murder and rape to avoid jail.


The third “Ash Wednesday” is a re-telling of the Cinderella story and is set subsequent to BARONNE STREET.  The events of the novel are briefly mentioned and as a result of those events Drummond is a darker character than in the first two stores and the novel.  There are two versions of this story.  The original was written for an erotica anthology and the safe-for-work version appeared in Thrilling Detctive magazine

The fourth story “Price Tag Attached” is collaboration with the prolific O’Neil De Noux.   Characters from our fictional universes solve the murder of a shady antiques dealer.   This story is set in what our sci-fi colleagues call an alternate timeline.

All of the stories are available in Kindle format from Amazon.com.

Sea Minor:  Two final questions.  Where are book and stories available?  Do you have a web site?

Kent Westmoreland:  BARONNE STREET  and the short stories are available from Amazon at

Thanks for interviewing me.