One Man's Opinion: ALL MY SONS by ARTHUR MILLER 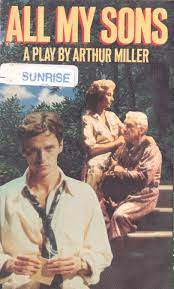 I don't think I've read more than one play since I was at school. Back then, it would have been Shakespeare and I would have found the references that I didn't understand and the language to be major barriers to enjoyment. Everything had to be explained and I just didn't get it. To me it was always much better watching his work brought to life on stage, which allows my mind to access it a little more.

The play I read in between times was Sweetheart by Nick Grosso and it had the advantage that I'd already seen it at the Royal Court. Very good indeed, both on stage and on the page.

All My Sons was a lovely surprise. I soon forgot that I was only reading dialogue and found and easy rhythm, mostly because the play lures you in and keeps building the pace and the drama.

It's a three act piece, each set in the same place, that being the family home of the Kellers. They're in a variety of messes and they all become untangled and further tangled in a short space of time.

Joe Keller is an old man who made it big during WW2 by profiting for the need to arm his nation. When issues with the goods he was supplying were raised after a number of planes fell from the sky, Joe and his partner were accused of killing the pilots. Joe got off and his partner took the rap. It's a precarious situation as those in the town aren't entirely convinced that justice has been done.

Joe's son, Chris Keller, has his heart set on marrying the daughter of Joe's now imprisoned father. A further complication is that she was once the sweetheart of Chris's brother who was a pilot that went missing in action during the war. The tension here is that Chris's mother has never acknowledged the possible death of her son and expects him to come home any day.

Enter George, son of the imprisoned partner and brother of Chris's prospective fiancée. George has just visited his father and has had an epiphany what is about to rock the family’s not too steady ship to the point where something will have to give.

Just outlining the story explains too some extent the complexity of the piece. There are lots of strands and they’re perfectly weaved together. We’re asked to consider a variety of issues as the plot unfolds and the play becomes more uncomfortable as layers are either peeled off or added.

My only reservation, me being a creature of novels rather than scripts, is the way so much is packed into such a short space of time. It feels unlikely that all of these strands would ever come together, but I guess that’s due to the confines of staging a play and the limitations that might bring. Even so, like adjusting to the format, this is easy to overlook and I found myself racing to the end and, even though it should have been predictable, I didn’t see it coming.

Having reached the final page, I was left with a feeling that I’d been here before. Memory not being my strongpoint, I checked it out and see that it’s also a noir movie which there’s every chance I would have watched at some point and may well watch again if I can find a way to do so.

It’s not a long read, but it’s a rewarding one nevertheless.

The good news for me is that it comes as part of a double-header and I’m looking forward to checking out A View From The Bridge very soon.