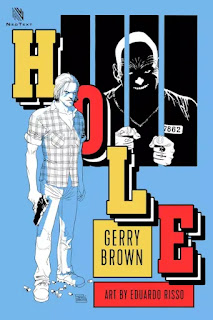 Here's a turn up for the books, me reading a one-man-fighting-machine-against-the-odds thriller, something I've tended to avoid for quite a few years now. Without understanding quite why, it's a genre I avoid as it doesn't really engage me beyond the page-turning energy of trying to find out what's going to happen next (the edge of that energy slightly dulled by the knowledge that the protagonist is indestructible and will be able to use their black-ops skills to kick ass and summarise all defensive and attacking positions in the blink of an eye). In a nutshell, I read a Jack Reacher book once and really enjoyed it, but didn't (and won't) go back for more.

The blurb for Hole reads:

It was the perfect shakedown.
Moundsville State Prison was rotten to the core. The guards were almost as crooked as the cons. Gangs ruled the jail, and Davie Ingram ruled the gangs.
The way it worked was Davie and his boys would isolate an inmate with no one to back him up. Hurt him, hurt him bad, on camera. Then send the video to the inmate's loved ones.
They wouldn't ask for much. Five, maybe ten thousand.
The first time.
Because if you didn't want your son, your nephew, your brother to play punching bag for the meanest motherfuckers in Moundsville, you had to pay again and again and again.
But this time Davie's crew picked the wrong man to shake down.
He's a man who won't take kindly to seeing a video of his brother being stomped by half a dozen vicious goons. A man who's a professional in the art of making people pay. Not with money, but with blood.
A man named...HOLE.

Hole has an interesting concept at its core. The idea that a prison gang can extort money by torturing an inmate is pretty cool. It works really well as a hook and, because Vint Hole is the man outside trying to save his brother, there's menacing energy in spades.

Vint Hole is actually very engaging. He keeps himself to himself and anyone with any sense is going to him allow him to do that; the Warlords might have been wise to do their research first so they could have found this out. While trying to save his incarcerated brother, he needs to take on a mean and well-organised crew. The journey will take him back to his roots as well as into the middle of a nightmare.

It's a fast-paced read, is written well and has a couple of unexpected and inventive twists to add to the pleasure. Illustrations by Eduardo Risso bring an extra and pleasing dimension to the whole thing.

As with Reacher, I really enjoyed this but won't be dipping in for more. That said, if Reacher and his many offshoots/imitations are what you dig, you should get your spade out now as I suspect Hole is a treat you'll devour.