One Man's (second) Opinion: THE BASTARD HAND by HEATH LOWRANCE 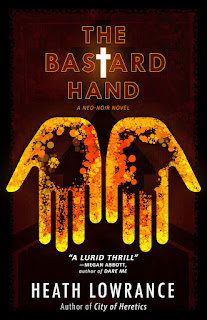 Here's a blast from the not-too-distant past. It's just been re-released by Shotgun Honey and has a wonderful cover that I hope will draw readers in. I reviewed this one way back when, and here's what I said:

their limits. The countryside had been turned into smouldering
fields, so nobody knew where the next flames were going to sprout
from.

That’s how I see this book. It’s a smoulderer which catches flame
regularly as the author expertly blows upon the embers.

Take the opening. It’s beautifully described. We meet Charlie,
escapee of an institution, free of his therapies and his medication,
wandering as his spirit takes him. Being in a town he doesn’t know,
he finds himself in a dodgy area and is soon battered to bits by a
small-time gang headed by a beautiful woman. He’s stabbed and
left for dead. And he was being nice, too. There’s certainly no
justice in his world.

He’s not one to go to hospital – it doesn’t seem to occur to him that
it might be a good idea. Instead, he does it his own way and lets his
body recover in its own good time.

Soon enough, he ambles over to the laundrette. Puts in his clothes
and discovers a bible with a hole through the ‘O’ of holy. He reads
Genesis until he’s interrupted by a preacher man, the Reverend
Childe, who could talk the Ten Commandments from Moses. Even
though Charlie knows the man’s no good, partly because he was in
a laundrette without any laundry, he sticks with him.

They visit a brothel, for the Reverend likes his drink and his
women and, from that point on, Charlie’s life is intertwined with
Childe’s like a swimmer might get tangled in pond weed.

From then on the book smoulders away, bursting into flame without
warning.

The series of events that follows unfolds beautifully. Not once
during the read did I feel any of the situations were forced, it was
simply the way it needed to be.

Missing preachers, small Southern town life, a crazy (though not
stupid) mayor, a number of women who all have their own allure,
gang battles, illicit stills and a series of plots and counter-plots like
you wouldn’t believe, fan those flames all the way through as does
Charlie’s madness.

Yes, Charlie is crazy, or at least he would seem so if the folk around
him weren’t so unusual. Lowrance is clever with his characters. I
felt blindfolded from the beginning so that I couldn’t tell the good
from the bad or the wicked from the saint. It’s one hell of a thing to
pull off, yet he did it with the subtlety of a close magician.

I loved this book. Really loved it.

It’s place in a contemporary setting, yet for me there are echoes of
older works and older times. The images I conjured for myself
were all in black and white and there’s something of the classic-noir
movie in this work.

Though full of dark events and madness, it’s written with a light
touch I hadn’t expected. Smooth as a ride on new tyres in a
freshly serviced car along a flat tarmac road when the living is easy.

His characterisations are so three-dimensional they’ll poke a reader
in the eye if they’re not careful. The people who inhabit the
book I liked, mistrusted, hated and loved in turn, every last one of
them.

The weaving through of the preacher and the bible offers a powerful
medicine of its own. Not an expert on the bible, I have to play it
through the filters of Nick Cave and Night Of The Hunter, but I felt
the weight of the Old Testament burdening the skies in the novel
and my own.

Lowrance plays with Charlie like God played
with Job. He takes advantage of Charlie’s misplaced senses of
loyalty and obligation, lets things go well then turns them all to
shit when he’s least expecting it.


I’ve mentioned a few of the echoes I felt as I read. Here are a few
other ghosts I felt were hanging around – Harper Lee, John
Steinbeck, Guthrie’s Slammer and the movie Inherit The Wind;
maybe it’s way off beam to cite those, but you’ll have to read it for
yourself make up your own mind.

A brilliant book by a writer of real talent.

I stand by everything I said. What are you waiting for?
Amazon (US)
Posted by Nigel Bird at 17:10