One Man's Opinion: CONVERSATIONS WITH FRIENDS by SALLY ROONEY 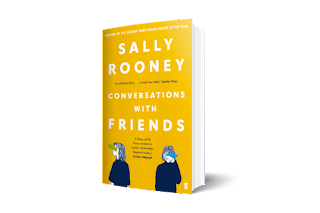 With her new book (released yesterday) on the way, I decided I'd revisit Sally Rooney's first two novels to get me in the mood. Without doubt, they have left me wanting more and I'm sure that Beautiful World Where Are You will be another terrific read to delight in.

Conversations With Friends essentially follows the affair of a young writer and a handsome actor in Dublin. It's a perfectly simple idea, yet the twists and turns of their interactions bring levels of tension and engagement that make the story feel very real.

Frances is our lens and through her we explore the difficulties and wonders of being in love. I found the level of exploration of her emotions and thoughts to be so involving that Rooney's writing became more than words, as if Frances's consciousness had somehow become intertwined with my own. I have no real understanding of how that was achieved and can only hope that however Rooney created the depth and strength of the characters, some of those skills will filter by osmosis into my own work. At times, it's as if we can see through an skin and into her inner workings and at others like we're wearing that skin on top of (or perhaps instead of) our own.

Perhaps what allowed the bond between Frances and my reader self to grow was the sense of common experience. It's so easy to identify with elements of the frailty and lack of confidence that we surely must all feel or have felt when growing up. It's magnified because the imagery and choice of phrase is so skillfully handled. There are poetic lines as well as cold and abrupt jolts that maximise the resonance and turbulence of the tale; she'd be a wonderful writer of noir should she ever want to reach a little further in that direction, which may not take such as big a step as you might think.

The ending was wonderful and I was totally conflicted by what happened. It's a cracker that had me shouting at the pages and pulling faces at walls while I came to terms with it.

It's a great read and I was really pleased to have Normal People as my next in line so that I could step back into a similar world as quickly as possible.