The Road To Publication by Ray Clark 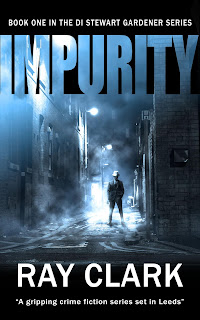 Seeing your work published is pretty much living the dream if you’re a writer. I’ve often heard it said that everyone has one book in them, and I believe that to be true. Publishers however, want more than one. They don’t want to invest in a book so much as an author. That’s probably when you realize how competitive the market place is: how difficult achieving your dream can be. Rejection slips are not easy to face and believe me they come in thick and fast at the start. That’s not to say that your book is bad, it often means you simply haven’t found the right publisher.


The best advice I would give anyone is, never give up. I didn’t. No matter how many times people told me something wasn’t right about the book (too long, too short, too violent, unnecessary sex scenes – in the first draft), I continued with such a determination and drive that you’d have thought I was mad, or ignorant – or both, to continue. For me, staring at a blank piece of paper with a wisp of an idea is therapy: turning it into a novel is a gift.


One book is a remarkable achievement for anyone. That was all I had in mind when my initial idea was nothing more than a brainwave. The starting point was some years back, when I was visiting a friend. I was searching around for something new to write: something different. I’d had a notion for a long time to write a story about an alternative Santa Clause, perhaps the total opposite of the nice fat jolly chap that we see him portrayed as.


Following a meal and a few drinks my friend mentioned that maybe I should think outside the box. Instead of writing another horror story, why not switch genres – write a piece of crime fiction? He felt that horror was a dying market (pardon the pun): that all the best horror writers were diversifying, into crime; his next question became the icing on the cake – what’s more horrific than killing someone? If you’re clever enough, you can write all the horror you want and slip it into the middle of a police procedural.


His suggestion still involved a Father Christmas: the idea being, have someone bumping off department store Santa’s. He couldn’t remember ever reading anything along those lines.


I believed he had something. The concept soon became the central theme for book 1 of the IMP series, Impurity. As with any book, there were plenty of other things I had to consider: why anyone would want to bump of department store Santa’s for a start. Once I’d thrown myself into the research I discovered I could have quite a lot of fun with the ‘how’. I didn’t want a simple stabbing, or anything involving a gun, or a hanging. I needed something that no one else had done. As my friend had said in the beginning, think outside the box.


I spent a lot of time mulling it over with a number of people, two of which were very close friends of mine: a detective in the murder squad, and a chemist. And trust me when I say that a chemist is a really valuable asset if you want to bring a whole new concept to the word, murder.

“The corpse of a seasonal worker living in very tatty conditions is bad enough, but someone has gone to great length to eradicate them by administering a flesh-consuming drug, resulting in the victim’s rapid and violent disintegration. Furthermore, pathology is unable to ascertain the cause.”

You can see from the paragraph above, we ended up with something quite unique.
As the novel progresses, I increase the horror: I keep the victim alive whilst it’s happening, and fully aware of the effect it’s having on his body, because it’s already been explained to him.


In truth, when I attempted the first book, I didn’t know it had a series in it. But the whole thing soon took on a life of it’s own. Before I was even halfway finished, I knew there was more than one book coming up. I was working with a pair of detectives whom I felt had a real future. One story wouldn’t do them justice. They had such a wealth of background material supporting their characters.


As with any crime novel, I still needed something else to make it stand out from the competition. I required empathy for my main character from the first page. It was quite some time before I decided on a surprising plot twist that sealed his fate as early as chapter one. I’d love to tell you what it is but I can’t. My apologies if I’ve just forced you into buying it.


Thinking along those lines is a daring leap into the unknown. As I mentioned earlier, writing one book is a remarkable achievement but you have to have some belief in yourself if you going to attempt a series. For one thing, you need the stamina and the ability to see it through. You need a fresh idea for each publication. You have to enhance the characters if you want your audience to stay with you. Furthermore, you have to convince a publisher to think the same way you do. Good luck with that one. The market is equally as hard for him as it is for you. He definitely wants to invest in a writer, not a book, but are you the one he really wants? You have to remember, yours isn’t the only book – or series – he has to choose from.


I had that belief. I knew that if other people could do it, so could I.


The whole series to date has taken a long time to get right, and in most – if not all – cases (or books), it’s been an absolute joy to do. That’s because I love working with Gardener and Reilly. They’re a great pair of detectives who have an excellent working relationship, and it’s been fun anticipating how they are going to react to any given situation.


I mentioned above that I thought being able to write is a gift. Sometimes it can take a while to recognize what you have. But when you meet people who have read your books and enjoyed them, and ask you when the next one is coming out, you realize what your gift is not only doing for you, but for other people.


To see the whole series signed up with a London based publisher is pretty much a dream come true.
When I think back, the really frightening thing for me was, after having spent considerable time with a chemist, I came to the conclusion that it might just be possible to achieve what the book is offering: that maybe, you can actually dispose of your victims in such a gruesome fashion.


My publisher emailed me about ten days after the release of Impurity to let me know that he was going to negotiate the rights for the audio book, and that he was so pleased with the reception and the success, the plan was to release book 2, Imperfection before Christmas.


So perhaps my gift is finally allowing me to live the dream. For anyone reading who wants to have a go, I wish you the very best of luck.


When theatregoers are treated to the gruesome spectacle of an actor’s lifeless body hanging on the stage, DI Stewart Gardener is immediately called in to investigate.


Is the killer still in the audience?


A lockdown is set in motion but it is soon apparent that the murderer is able to come and go unnoticed. How do they do it?


Is the killer a theatre worker or an actor? And what kind of grudge do they have to bear?


Frustratingly, the killer leaves a trail of clues for the detectives. Taunted by these and flummoxed as to their meaning, he realizes that his own family may be in danger.


Identifying and capturing the culprit will mean establishing the motive for their macabre crimes, but perhaps not before more victims meet their fate.


Can DI Gardener succeed where he has failed in the past, and protect his own?

Ray Clark is an award winning Yorkshire born author whose first big break came in 1998 with the publication of Manitou Man: The World of Graham Masterton (a biographical account of the author’s work), which was nominated for both the World and British Fantasy Awards.


Over the last forty years, Ray has also spent considerable time in the music industry working both in the UK and Europe as a guitar vocalist, and with a number of bands. These days, Ray divides his time between writing books and working live on the music scene, and helping to raise money for the OPA, a charity he feels quite close to.


Ray’s London publisher, The Book Folks are planning to release Book 2 in the IMP series, Imperfection, in time for Christmas.


Impurity is available from the links below:
Amazon UK link
Amazon (US) link
The Book Folks (publisher link):