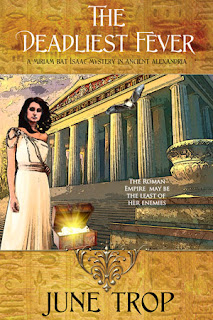 Hello mystery lovers. My name is Concordia, daughter of Marcello Gaius Segundus. It’s almost high noon on three days after the Calends as I wait for Miriam bat Isaac here in Zenon’s café near the Central Plaza of Alexandria’s agora. Against the rasp of soldiers’ boots and the blandishments of peddlers hawking olives, boiled elephant beans, and honey-sweetened water, I’ve been rehearsing the questions—


Oh, wait. Here she comes, stunning in a short-sleeved, floor-length lavender tunic, matching veil, and a light blue, woollen himation pinned to her shoulder with an antique fibula. Certainly not the thirty-something-year-old, wide-hipped matron I expected! I stood to greet her and pointed to a chair facing the shop’s graduated marble shelves of glassware, cutlery, and crockery.


“Thanks for coming, Miriam. This interview is important. Your community is already aware of your success as an amateur sleuth. Now it’s time for the rest of Alexandria to recognize your contributions.” I hope she didn’t notice the jagged rise in the pitch of my voice. Fortunately, with a few deep breaths, the constriction eased.


Miriam slapped some imaginary dust from her clothes and with one smooth gesture, calmed her skirt, ran her hand over the seat of the chair, and took her place. No sooner had she gotten settled when a mousy-haired, knock-kneed waiter cut a clean line around the tables shouldering a tray of tiropita and proffering her a clutch of flatware rolled in an Indian cotton napkin.


I dismissed him with a wave of my hand.


I nodded. “I asked you to come so I could learn about the books June Trop has written about you. But first, more generally, why does June write about you?”


“She writes about me because she knows when I undertake a case, justice will prevail, that I have the will to persist and the hunger to survive. Once I had to follow a suspect through the midnight underbelly of our Rhakotis Quarter, where thieves prey on the nameless and dump their corpses into the canal. But even the flickering light of my dying lantern, the stench of the dankest alleys, and the scratch of every whirling piece of trash whispering threats in my ear didn’t discourage me.”


Miriam looked around to make sure no one could overhear us and then lowered her voice to an intimate pitch.


“And I permit her to write about me because she plays fair. She gives her readers all the clues so they have a good chance of not just helping me but coming up with the solution before me. But I’m proud to say—and forgive me for bragging—no one ever has.”


“What’s been your most mystifying case?”


“I think my latest one because it was so complex. June has called it The Deadliest Fever because the definitive clue came from the bite of a rabid bat. She was amazed at how I figured out the connection between a jewel heist in Ephesus—Did you know that the thieves who’d stolen the treasure from the Temple of Artemis sailed here? Anyway, I was able to figure out their connection to the death of a sea captain and the desecration of the Torah mantle in the Great Synagogue.”


“Sounds like quite an adventure. So, how did you get started sleuthing?”


Miriam steepled both hands and pressed her index fingers to her lips. Then she folded both hands in her lap. “June wrote about that in The Deadliest Lie, her first book about me. During my family’s Shabbat dinner, documents were stolen from my home, records so valuable that the bearer, if caught, could be summarily executed.” Miriam spread her palms open on the table. “So, of course, I had to get them back, if only to save the thief’s life. That meant I had to find out who stole them, and I had to do it fast.”


“What are June’s plans for you now?”


Miriam tilted her head slightly and gently stroked her chin. “She’s written a fifth book, The Deadliest Thief. She hasn’t let me read it yet—it won’t be released until next year—but she says it’s about when my Phoebe was kidna—”


“Phoebe? You were saying Ph—”


“Oh, Dia. Over there. Someone has a dagger—Can’t explain now—Just a few words about my chronicler. June Trop has a website, http://www.JuneTrop.com. You can learn about me and her books—four out already—even read an excerpt or buy them right there simply by clicking.”


With that, Miriam wheeled out of her chair, nearly toppling it over as I called to her back, “Thank you, Miria—” And then, turning to the crowd that had gathered before us, I announced, “Mystery lovers, you can read all about my interview with the intrepid Miriam bat Isaac as soon as I can post it on the bulletin board by the East Gate.”
Posted by Nigel Bird at 15:45