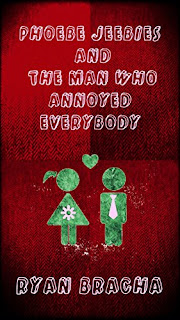 The man sitting across from me chewing eagerly on his thumb, looks like he can’t wait to get out of here. His sweaty eyes darting around, looking everywhere except at me. In the corner of the room sits the lady who has the formidable task of stemming the flow of crap that will inevitably spill out of his fat mouth. She has the resigned look on her face of a person who knows she’s fighting a losing battle. Hope in her eyes that he’ll finally say the something controversial enough to finally free her of her station in life. Maybe after that, she can go and represent a good-as-gold soap actor, or clean cut pop star. Not this failing author of nine books that are as attractive to the mass market as Jesus-in-a-slice-of-toast is to a staunch atheist.

Eventually his eyes land on mine. He smiles a wide smile. I note that while he has the front set of his teeth intact, behind them, he is missing several important back teeth. Those that do remain are rotten. I wonder if his teeth represent a horrific metaphor for his mind. He asks what I want to know. Looks at his watch. Folds his arms and rests them on the gut he developed through a love of sweet cider and lethargy. His breathing grows heavier from such simple exercise. I wouldn’t be surprised if he were dead in ten years. I clear my throat and our interview begins.

Me: Sorry, Mr Bracha. Ehm, Phoebe Jeebies and The Man Who Annoyed Everybody (US). What is it about?

Him: Read the blurb. It’s all there. Come on. You can do better than that.

Me: Where… did the idea come from?

Him: I was going to write a story about a compulsive liar. That’s what it started out as. That’s what it was until about four chapters in and the characters surprised me. They took it somewhere else.

Me: To a man who annoyed everybody?

Him: To a man who annoyed everybody.

Me: What about PhoebeJeebies? Where does she come in to all this?

Him: She’s been on my mind for a while. I wrote her into a story a couple of years ago, but it didn’t go anywhere. I lost the buzz for it and binned it. Phoebe was put on the shelf for a suitable vehicle. This was it.

Me: Tell me about Phoebe. Why did she stand out enough to remain?

Him: Because she’s brilliant. She's everything that's good about the women I care about in my life. She's a love letter.

Me: Okay… Fair enough… I guess. You say you binned the other story? Did you not plot it? Plan it? Surely that would have been a huge waste of your time?

Him: No. I don’t plot or plan. I don’t edit a huge amount either. I can’t do it. I get lost in what I want to do with the story. I find it much easier to just write and let the characters take it where it needs to go, maybe with a couple of plot points that come to my mind as I write. If it goes too far down a path I don’t see mileage in, I’ll delete, or put it to one side to steal from later, and give them a chance to start again until I’m happy with the direction they’ve taken it.

Me: That seems like an odd way of working.

Him: Your face has an odd way of working.

Me: You're quite prolific-

Me: Ehm, yes. You've written and published eight novels in the same time it took you to write your first. What changed?

Him: The way I write. My first novel is a mess of a hundred different devices and narrative techniques, but it helped me to make the mistakes I needed to make, to help me figure out the kinds of stories I wanted to tell and way I wanted to tell them. The first draft of my debut novel was littered with grammatical errors, continuity issues, plot holes, and a dog whose name was either Freckles or Oscar whichever chapter you read. The first draft of Phoebe Jeebies had six typos. Practice makes perfect.

Me: Quite. It's been said that you're not right in the head. That you're disturbed. What would you say to that?

Him: I heard you.

Him: It's also been said that originality and creativity are my speciality. If that's a byproduct of being fucked in the nut, I'll take it. If you want paint by numbers fiction then you're in the wrong place. If you want a horrific situation boiled down to a thick jam of dark abstract humour then come on in, the water is just lovely.

Me: But this is an interview to promote your romantic comedy.

Him: Romance can be horrific at times.

Me: This isn't going quite where I thought it would.

He leans forward and grabs my cheeks. Pushes them toward my nose and then slaps them hard. Calls me Chopsy Chops and leaves the room. His assistant rolls her eyes. Apologises. Follows him. Thirty seconds later he returns. He throws a copy of his book at me and tells me I'll enjoy it. He says it's basically an instruction manual for pissing people off while at the same time being a messed up love story. He says if I have any kind of sense of humour or disdain toward general society then I'll spit beer out of my nose with laughing. I open it at the first page. On it, there is a crudely drawn cartoon penis. The bulb has a smiling face on it. The globs of cartoon sperm each hold a letter. C.U.N.T. He's most certainly fucked in the nut, as he so eloquently put it, but I suppose that's what appeals to his readers.

Ryan Bracha is the author of nine novels and a collection. He once won an episode of Fifteen to One, and he's got a weird aversion to stickers and days old bus tickets. They make his fingers itch. He lives in Barnsley with his wife and two year old daughter.

Phoebe Jeebies and The Man Who Annoyed Everybody (US) is available now for 99p/99c.