One Man's Opinion: AND WHEN I DIE by RUSSEL D MCLEAN 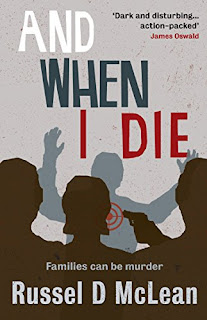 ‘Tony deserves to die,’ I say, ‘More than I deserve to live.’

We're all rooting for Graeme Macrae Burnet's His Bloody Project in the Man Booker's aren't we? I'm hoping he wins, but whether that happens or not, I'm delighted for all those involved that the book has had so much exposure and wonderful feedback. I may not have read it yet (it's near the top of the pile) but I'll do the odd old-man cartwheel if it comes in.

In case you've been switched on by his work, I'd like to shine a light onto another book published by Saraband's Contraband imprint.

Russell D McLean has produced yet another cracking novel for you to enjoy and I reckon you should pick yourself up a copy as soon as so that you can share in the pleasure of this one.

And When I Die (US) is set in Glasgow. Like any well-written novel, the city itself is part of the fabric of the story. It’s a living and breathing entity which has moulded its population over the centuries, some for better and others for worse.

The Scobies have an interesting past. Previous successes have been whittled away by each generation as circumstance shifts against them and the only way for the current head of the family (Derek) to get back on top was to turn to crime. It turns out he’s rather good at it, too. Of course, it helps if his henchmen are super tough guys with enormous reputations and cold hearts. The most feared of all the Scobie killers is his son, Ray. Ray’s a beast. A giant. A cold-blooded killer who doesn’t feel pain, but he also has a tenderness rattling about inside him. There’s a touch of Frankenstein’s monster or of King Kong to him in that respect, and he’s just as compelling. When we meet him, he’s about to be blown up by a car bomb and he’s not going to emerge from it well. And then things get worse.

The bomb has been planted by an undercover cop (John) whose own identity has always been unstable. His infiltration into the Scobie family has done nothing to help him find clarity in life and he’s more confused than ever about what he should be doing next. He’s so deep into his undercover work that his criminal life has taken over from his police role and he no longer has a sense of what he really is. The waters have been further muddied by his feelings for Kat. Kat was his way into the family in the first place. He wasn’t supposed to fall for her, but things don’t always go to plan. Unfortunately for both of them, their relationship had to end and Kat left the city to find some of the quiet life. In the aftermath of the car-bombing, John is forced to face up to what he has done to her and to see if he can sort everything out and make amends.

Kat had another special relationship in her life, a bond with Ray that holds them tight. She comes back for Ray’s funeral, not knowing that Ray isn’t in the coffin. Returning home screws with her mind as she reflects on her past. Needless to say, the last person she wants to see is also the first she’d like to meet, and that’s her ex. When they do finally get together again, their chemistry is rather explosive, though not in any of the more romantic connotations that phrase might hold.

Kat and John tell their stories in alternating chapters and in the present tense. This means the action feels fast and that the tension is amplified as it constantly builds. As the world around them falls apart, loyalties are tested to the full. Everyone is conflicted in some way and each decision comes with a slice of doubt or a dose of guilt. Nothing is easy and none of the options are likely to end up with a simple conclusion.

Ray is magnificent. John and Kat are perfectly flawed. The surrounding cast play their parts admirably and McLean shows off his talent for creating gripping and emotionally demanding tales.

Noir with deep roots and a bagful of broken promises.
Posted by Nigel Bird at 19:46