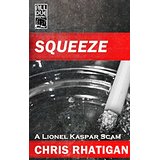 Lionel Kaspar’s first love is gambling. His second and third are booze and cigarettes. I’m not sure he has a fourth. His work at the public health department is easy enough for him to tolerate, but the pay’s poor and he needs cash to support loves one, two and three. The opportunity arises for him to take on a position as a journalist with a local newspaper. It doesn’t matter that he has no qualifications for the job, because he has no scruples either and just makes them up.

It isn’t long before he’s making up other things either. Front page stories, for example.

Pretty soon, he’s the rising star of the press and is enjoying the freedom his new lifestyle allows. The money’s great and he even starts to appreciate some of the skills in the craft of sniffing out stories and writing news. The problem is, he’s greedy and the money isn’t enough. When the idea of blackmailing people with what he knows occurs to him, it looks as though he’s hit on the magic formula that will give him everything he needs.

Noses are quickly put out of joint. He rattles the cage of one hack in particular and before long Kaspar’s new life is in serious danger of being flushed down the tubes. Now that he’s tasted the sweet smell of relative success, he’s not prepared to let it go without a fight.

Squeeze (US) is a brilliant story. The central character is a terrific creation. He’s cynical, cold and sleazy, but he’s also extremely entertaining and sharp and easy to hang around with. Rhatigan injects an uneasy tension at each turn and ratchets up the pressure steadily all the way to the final crisis.

I love the way this tale is hewn from the ordinary and that the author exploits the flaws in everyday people to drive things forward rather than simply throwing the kitchen sink at the plot. The whole piece is gripping and yet nicely understated from start to finish.

I have no hesitation in recommending Squeeze. It’s exactly the kind of book I want on my kindle.  A definite ace in the hole.
Posted by Nigel Bird at 13:55