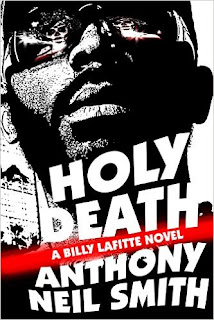 I still get a buzz when I remember that Blasted Heath publish my work. That they have taken any of my pieces is truly wonderful. For them to have a novella and a series, well that makes me feel special.

It makes that tingle even more powerful when I read books like Holy Death (US), the new Lafitte novel from Anthony Neil Smith. To be in a solar system that includes a title like this, even if I’m out in the range of Pluto and have experts wondering if I’m a planet or just a rock, that’s enough for me.

Another treat that comes my way because of the Heathen association is that I get to read the odd book before it’s officially released. Holy Death was one of those and by the time I’ve finished I hope you’ll go and join the queue by making a pre-order purchase.

You may already be feeling like ignoring this recommendation. Feel that I’m merely trying to promote something to help my publisher and their stable. That’s not an unreasonable assumption, but it’s inaccurate in this case. I’ll try and explain why.

Holy Death is a neatly put together work that is told from multiple points of view.

Billy Lafitte is on the way to meet up with the love of his life for what he hopes will be one final time. There are a several obstacles blocking his way, however. There’s the security of the institution in which she is kept; an ailing heart battered by body-building products; and there’s DeVaughn Rose who is seeking revenge for his brother’s death many years earlier.

DeVaughn is an ex-gang member turned gambler. When we meet him, he’s getting to know a young waitress called Melissa. Melissa is aware of her short-comings. She’s tired of the limitations that life and living put upon her. She’s ripe for a world of excitement but the only folk who pick her from the tree are no-hopers. When DeVaughn and her collide, they mutually understand that there’s destiny and chemistry at play. When they’re with each other  they’r e on fire.  It doesn’t matter how long that flame burns, either, just as long as they’re together to keep it alight.

DeVaughn soon has to turn to his old gang for support after Lafitte dispatches the first wave of surveillance with consummate ease. This allows for a wonderful perspective on the culture from a jaded old-timer as well as from within. There’s detail and observation at a very high level, expressed with humour, sarcasm and abrasive dialogue.

As the net around Lafitte closes, things are further complicated by the involvement of the FBI whose agents and ex-agents also have scores to settle.

The energy of the book is fabulous. The momentum of the chase is high. It’s complicated by the fact that, though it should be impossible to root for any of the characters involved, there are levels of sympathy created for almost all of them. Problem is, as the world heads towards a conclusion, the only thing that’s certain is there’s no way all of them can make it out alive.

There are several jewels in this crown.

The first is the way those points-of-view are handled. This is expertly done. We see the world through the filters of protagonists that are superbly individual. It’s not a case that the author simply throwing his voice and putting on different accents, he’s going all the way.

Next there’s the style of the book. The use of language is really creative. This guy’s the wordsmith that his name suggests. I derived a lot of satisfaction from the sharpness of the dialogue and from the internal voices because of this invention.

The last I’ll mention, and biggest for me, is that crackling relationship between DeVaughn and his lover. These guys are as good a duo as you’re going to find anywhere in crime fiction. The passion is extreme. There’s lust and sex and mutual respect. Their wholehearted commitment to their objective of seeing the end of Lafitte is something to behold and they are definitely much more than a sum of their parts.

Smith tells stories with a kind of scorched earth policy. He smashes everything up almost as quickly as he builds. He creates a world that is violent and exhilarating and action-packed, but the one thing that's definitely left standing after the destruction is the high quality of the writing.

So there they are. My thoughts on Holy Death.

If you’re still in any doubt about what to do next, just check out the cover. It’s a work of brilliance and, in this case, it’s a great indicator as to how this book should be judged.