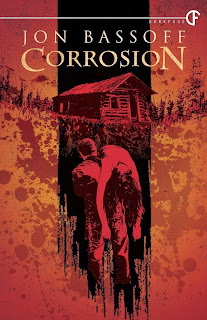 I really enjoyed Corrosion. It’s a stylish novel that tells a number of stories that merge together to create a nightmarish tale.

As an opening, an Iraq veteran becomes stranded in a small American town when his car packs up on him. The veteran has a scarred face – totally scarred – and this has an impact upon all the interactions he has.
It’s not long before he gets mixed up with a classic femme fatale. He’s pretty switched on about the way he’s being treated, but goes along for the ride with a compulsive need for a woman he needs but barely likes. As this story picks up, the veteran gets himself in a whole barrel full of scalding hot water.

This story in itself would have probably satisfied my requirements from the book, but Bassoff doesn’t stop there. He takes us to another place. Another corner of the world where things are utterly dismal.

A woman is dying in bed. Her husband has been experimenting for many years to find a cure for her. He has found the Christ Rat. The rat in which he can pin all his hopes.

This couple has a son. He’s pretty much been forced to bring himself up, missing out on school and on social norms. As such, he’s forced to live in the margins, not just of society but within his own household. Accompanying him while he shifts from bad decisions to unfortunate events to the sick-bed of his mother makes very uncomfortable reading. Thank goodness for Constance, the waitress who offers a shaft of light in his dreams.

For a while in the book, I was taken to the movie Angel Heart. The echoes that took me there were the war-vet who has only a loose grasp of his identity and whose credentials are brought into question as the story unfolds. An uneasy sense that the man isn’t all he thinks he is gives the book a strong and original edge. Unlike Angel Heart, there’s no need to shift into the realms of trickery and all of the connections are very plausible. There is a Lou Cifer of sorts, only in this case, the devil is merely a human being.

One of the things I particularly enjoyed here was the speech. There’s no punctuation for it and it takes a page or so to get used to. When I clicked with this, I really loved it. To my mind, it must have made the author work that little bit harder, but it was well worth it for the streamlining it offers and the hard edge it gives to the dialogue. It really does work very well indeed.

Congratulations Jon Bassoff for an excellent debut. I’ll be looking out for more.
Posted by Nigel Bird at 10:39