One Man's Opinion: NOTES ON A SCANDAL 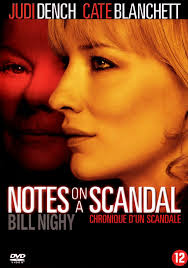 In the film 'Notes On A Scandal', Sheba Hart (Cate Blanchette) is a beautiful teacher who arrives to work in a secondary school early on in her career. She immediately incurs the suspicion of Barbara Covett (Dame Judi Dench), a rather long in the tooth battle-axe who isn’t far from retirement.


Barbara tells the story via her regular diary entries.  At the beginning, they’re nothing out of the ordinary, but as the plot unfolds a sinister, bitter undertone is slowly revealed.


Sheba and Barbara become friends. It’s a relationship that is to become extremely twisted given Barbara’s unhealthy motives.


As their friendship grows, Barbara soon manages to worm her way into Sheba’s family life and begins to sense feelings in her friend that might not actually be there.


When Barbara discovers that a Sheba is having a sexual relationship with an under-age pupil, things heat up and the plot thickens nicely.


I really enjoyed this flick.


The setting had me feeling nostalgia for my own North London days, but it also had me thinking of older films, often French noir – very unsettling, slightly claustrophobic, tense and complex.


It’s all helped by some extremely good performances by all. The two main characters are extremely well played and caused my loyalties to split as morals melted and blurred along the way.


There’s a creepy tension to the plot and a real sense of the pain of the two women from their very different perspectives that makes this well worth a watch.


A great way to spend a Saturday night.
Posted by Nigel Bird at 09:33