One Man's Opinion: THE YELLOW DOG by GEORGES SIMENON 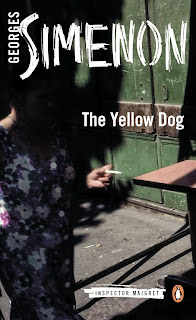 Just before kick off on this one (and speaking of kick off, Preston North End will be playing the first leg of their promotion playoff tonight and I want to wish them well) there's a great new book out by Len Wanner called Tartan Noir (US). I've seen Len interview Allan Guthrie and William McIlvanney and can tell you that he's an extremely well-informed academic and he also has a great sense of style as a speaker. In this one you'll find a thorough working over of things noir in Scotland and I'd recommend it as a read to anyone who has a strong interest in the subject. Here's the blurb:

A comprehensive and fascinating guide to the worldwide crime fiction phenomenon known as Tartan Noir covering all its major authors. What is Tartan Noir? Which authors belong to this global crime fiction phenomenon? Which books should you read first, next, again, or not at all? And what are the many historical, political, and cultural influences that have woven themselves into the Tartan Noir success story? Here, Len Wanner investigates the literature’s four main sub-genres – the detective, the police, the serial killer, and the noir novel. Covering four decades’ worth of literary history, Wanner offers not only four in-depth cross-examinations but also close readings of another 40 novels – everything from commercial hits and critical triumphs to curiosity pieces and cult classics. Books critiqued include international bestsellers by the likes of Ian Rankin, William McIlvanney, Val McDermid, and Denise Mina, alongside lesser known gems by counter-cultural icons such as Hugh C. Rae, Ray Banks, Allan Guthrie, Helen FitzGerald, and many more.

'Tartan Noir seems to me a ground-breaking book. The intensity of Len Wanner's intelligence sees beyond the superficial perception of crime fiction as just a way to pass the time to find in it a significant reflection of society.' --William McIlvanney, author of Laidlaw and Strange Loyalties'Sharp, insightful and thoroughly readable. Wanner brilliantly analyses a current literary phenomenon. A must-have for all readers of Scottish literature and Tartan Noir. It gave me a real sense of the history of it and just how many good writers there are!' --Denise Mina, author of The Field of Blood and The End of the Wasp Season

In The Yellow Dog (US), Superintendent Maigret is sent to investigate a shooting in a small coastal town in France. It’s not long before there are other crimes committed in the locality and they all centre upon a group of men who frequent the Admiral Hotel. Firstly, poison is discovered in the bottles of Pernod and Calvados which happen to be the tipples of the group in question. Later on one of the men vanishes, suspected killed, and another is found dead in his home.

The chief suspect in this is a huge vagrant who has been seen lurking around the harbour. His main companion is a scruffy yellow dog who has a habit of being present at all of the main incidents.
Maigret, of course, is undaunted by the developments that are taking place on his watch. He doesn’t mind the journalists who are hungry for stories and attempt to inflame the situation at every opportunity and he’s no respecter of the prominence of those who are putting pressure on him to solve the case, especially the mayor who is trying to keep the town in order.

The superintendent goes about business in his quiet way. He forms relationships with those he instinctively feels are key characters. He takes note of the tiny little details that happen around him. He’s able to use his knowledge of people and of the behaviour of the various strata of society to put pieces together. He’s not beyond the unorthodox approach and he’s abrupt with anyone who gets in the way. In this book, he’s also working with a new policeman in his team, Inspector Leroy. Leroy is young enthusiast who is keen to do things by the book. Maigret is often rather aloof with Leroy and can be rather harsh, but he’s passing on the lessons of police work in ways that only he can and points out that there is no one approach to the investigation of crimes as each one has its own flavour. Maigret is hard and tough much of the time; he’s also warm and generous when the attention is off him – it’s a great mix.

There’s plenty of action in this case and the plot is unfolded very nicely. It’s always engrossing and Simenon throws in plenty of surprises and red-herrings to keep a reader guessing. As much as the case itself, though, it’s the observation of human nature through the inspector’s filter that make this book such a treat.
If you’ve not read a Maigret before, this would be a fine starting point. If you have, this is definitely worth a visit even if you’ve been here already.