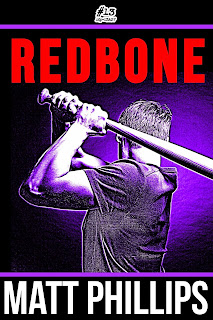 “Progress,” Ronald said. “That’s all there is any more.”

It's the thirteenth of the month again. That can only mean another release from the Number Thirteen machine. Their latest, Redbone (US),  is another treat for us all.

Calvin G Redbone’s days all start the same way. About the most variety he finds is in the volume of bourbon he pours into his coffee or in the country tunes that play on his radio. Of course, as soon as we know that everything’s always the same, we also know that things are about to change forever.

Redbone’s day is a disaster. It opens with the death of his best friend, Mister. If that weren’t enough to knock him off balance, he loses his job at the used car lot and there’s a guy sniffing around the old drive in cinema that Redbone holds so dear. It’s the kind of day that’s would to drive anyone to unravel a little. Unfortunately for Redbone, he’s wound tight. When he starts to crack there’s a huge power to the internal weight he’s been carrying about with him since his time in the army and there’s not much his external shell can do to contain it. He’s living in a world that seems to have lost touch with basic values and he’s about to make a stand.

What makes this book work so well for me is the way Redbone accepts his situation. He knows what he has to do and why and that’s enough for him. He’s been a victim long enough and it’s time to take a stand. Even when those close to him try to warn him off his course and even when the world finally seems to give him a break, he sticks to it all the way and make sure he works things through to the very end. What he has to do is too important to think of himself only – it’s not just those who’ve offended him that he’s taking on, it’s the whole system.

The conclusion seems inevitable, but the writer manages to keep up the tension throughout by leaving open the question of how far Redbone will take things until the very end.

I found this a really good fit for me. I like the way that Redbone interacts with the world and really enjoyed some of the interplay between him and the other characters on the trailer park, especially the luscious Marnie and the teenage football player Ricky Fife, who allow reminiscences and reflections which serve to intensify the material.

In Redbone (US), the team at number thirteen have another winner on their hands.
Posted by Nigel Bird at 07:13