One Man's Opinion: THE DEVIL DOESN'T WANT ME by ERIC BEETNER 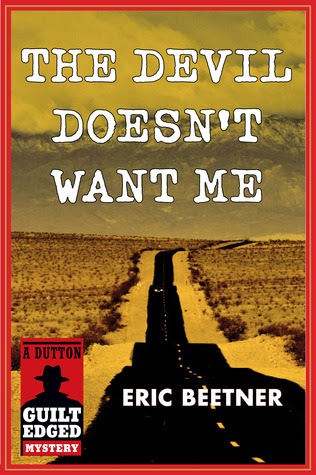 
Eric Beetner takes a number of clichés and twists them until they become new and fresh.


Lars has been working in the one hit for seventeen years. During that time he’s kept his killing skills sharp and has taken up yoga to keep his body keen. He’s been hanging around New Mexico in the hope that he’ll finally complete the contract put out by his employer Nikki Senior.


Unfortunately for Lars, Nikki Junior is in the process of taking over the family and he’s not showing his father the respect that he might. Nikki Junior hires a young buck, Trent, to get together with Lars so that the job can finally get done.


The relationship between Lars and Trent is a tricky one. Maybe that’s always the way when the next generation steps up. Thing is, Trent has his ways and means even if he is young, foolish and uncouth. He’s soon leading the way to Mitch the Snitch and the hit that Lars has been waiting to make for so many years of his life is finally about to happen.


Nothing plays out as might have be expected by this reader or by any of the characters involved. You’ll know what I mean when you get there (and get there you should).


The upshot is that Lars ends up on the run with Mitch’s daughter, being chased by Trent and all of Nikki Senior’s resources. Which is just the beginning of Lars’s problems. His past (and a very interesting one he has, too) is to catch up with him, the FBI poke in their noses and the relationship with the teenager (Shaine) is far from easy.


There are a number of layers to the story. I’d pick out the battle between the old and new as one strong theme and the relationship between parents and children as another. Most of all, I’d pick out the fast pace of the story and the way the characters and settings are so well handled. As an example, I’ll highlight the way the description of the heat and environment of the desert had me sweating and reaching for cold drinks. He really nails the atmosphere through his characters – Lars has grown used to it and has altered his pace accordingly, Shaine has never known anything else and Trent is hitting the wall for the first time. This means that the description flows within the story itself and never gets in the way, which takes some doing.


The whole piece is very entertaining and the outcome ties everything up in a very satisfying (and rather unexpected) way. There’s also an opening for a sequel here. I can see this moving in to the territory of Leon by Luc Besson and doing something rather special. I wonder if Mr Besson’s busy just now.