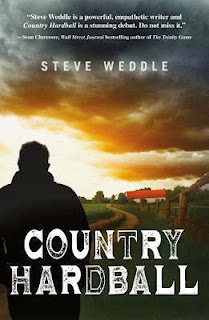 Steve Weddle’s Country Hardball is a tremendous collection of stories that intersect and overlap to form a major modern work. He really has put together something rather special here and I’d urge you to read it.


There’s so much to love about the book that it’s difficult to know where to start.


I’ll begin with the cover. That’s not the obvious place, but it does hint at what’s to come. It has the silhouette of a man walking down a lane that passes a small house and then disappears as if to nowhere. Above his head is a circle of sunlight that’s surrounded by oppressive and powerful looking dark clouds. It’s a strange balance of the static and the moving. A blend of hope within hopelessness and hopelessness within hope. And the house, solitary and small, could hold anything from a warm welcome to a sinister ending. In these ways, it gives a suggestion of what’s inside.


The stories themselves are beautifully balanced. They tend to play out major moments in people’s lives as seen through what might be everyday happenings or simple interactions. It’s that ability to focus upon the small and suggest enormity that really highlights the talent of the author.


Weddle has a wonderful sense of touch. The weight of the words is practically perfect and, like I imagine the battle of wits between a baseball pitcher and a hitter to be, the changes of pace and direction are gripping.


Should you read this, you’ll get the chance to walk a mile or two in another’s shoes. The shoes aren’t likely to be new or well-healed, but by the time you get to take them off, you’ll know you’ve been on a journey.


Weddle must have a wonderful ability to empathise with people because, more often than not, I felt I’d really inhabited someone’s life for a spell. Understood their woes, their fears, their dilemmas and their need to cope. Each tale did something to my breathing; as I reached the end, I’d find I was either deeply inhaling, exhaling or simply holding on to my breath like I didn’t want to let it go for a little while longer so that I could savour the last nuances of the page.


A review, any review, will struggle to do the book justice. I did try and pick out a few quotes here and there for a while in the hope that I’d be able to give a sense of what I’m trying to say. In the end, I was sticking so many markers in between pages that I couldn’t hold the thing up any more without losing them.


Here are a couple of moments from The Thing With Feathers. A boy shoots a bird, injures it, and suddenly wants to take back the damage:


‘The bird fluttered at his touch, shifted along the ground, then settled under the boy’s hand,’


which sets him thinking about his mother:


‘He thought of lying in bed with his mother when she got the sadness,’


and then takes us to the time the bad news arrives:


There’s such a melancholy beauty to the sentences and phrases that I couldn’t help but be moved. That’s the way I felt throughout – moved and shaken and wanting more.


And then there was this:


‘On a good day I could get a Texas Rangers game [on the radio]. I didn’t much care for any of them, but if they were playing the New York Yankees, at least I’d have someone to root against. Sometimes it just works out better to root against something.’


Each of the stories was my favourite while I was reading it – I think they’re all that good. With a small amount of distance from it now, I loved the opener about a boy who’s had a family heirloom taken from him by bullies and think it really sets the tone perfectly. A story about parents whose child is trying out for the All Stars and who can’t afford for him to make the grade (maybe they could buy just one more lottery ticket a week – they’ll think of something) is really special.  The story of the store manager who remembers burying an elephant when the circus came to town while he tries to decide which of his employees to lay off is stunning. Not to mention the ex-military man who finds the girl who’s been missing for a while.


Important to me is the political flavour of the work; there’s no capital P to the word in this collection, but it is often an indictment of the poverty many have to suffer in these times.


Best thing I can do now is shuffle on and let you buy the book and read it for yourself. No doubt you’ll be as impressed by these tales as I have been.


If there’s justice, Country Hardball will be studied one day and still be talked about fifty years hence. Here’s hoping.
Posted by Nigel Bird at 22:46