One Man's Opinion: HIS BLOODY PROJECT by GRAEME MACRAE BURNET 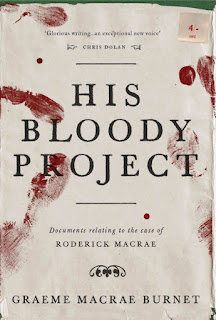 ‘I told him that my mother had lately died during the birth of my younger brother and this had caused our family a good deal of hardship. Archibald Ross replied that for folk like us there was no other ship than the hard ship.’


His Bloody Project (US) is a novel of considerable power.


In the main part of the novel, Roderick Macrae offers his own account of the events surrounding the murders he has committed in his community. He gives insights into the build up to the slaughter and the events in the jail afterwards. His reflections are wonderfully told in a voice that is reminiscent of fiction from other times. There are echoes of many a classic, shades of existential French work from the middle of the Twentieth Century and whispers of philosophical treatise, which may suggest that it’s dry and boring in the context of contemporary stories. On the contrary, this is a gripping and tenacious read that is sure to engage any lover of books.


The story of life on a croft is told vividly. As Roddy and his family barely eke out a living on the strip of land behind their home, their toils are made impossible to bear by the local constable, Lachlan Broad. He’s a brute and a bully of a man who manages to interpret laws and bylaws in ways that make the Macrae’s lives hell. The pressure is put on slowly like a slow-turning tourniquet that is gradually cutting off the flow of life blood to the limbs. It’s painful to observe and  the atmosphere becomes more claustrophobic as it develops. Though there is a emotional undercurrent to the telling of this excruciating existence, it is told in a similar matter-of-fact way as the young man accepts what he has done with no regret or need to try and avoid punishment. Things are what they are. He has made his choices and acted, so will suffer the consequences. As such, The Account Of Roderick Macrea is as gripping and satisfying a read as I’ve had in a long time.


There are other elements of the book, slighter and less harrowing to my mind. There are the relevant medical reports, Travels In The Border-Lands Of Lunacy and an account of the trial itself.  These are additions to the main story and offer alternative perspectives on the family, the situation and the murderer. While they are interesting and provide food for thought, I’d have been happy if they hadn’t been there. They don’t diminish the main story in any way, it’s simply that I didn’t need them.


His Bloody Project is heartily recommended. It’s knockout fiction and deliciously dark. Go and get yourself a copy, you certainly won’t regret it.