One Man's Opinion: THE HECKLER by ED McBAIN 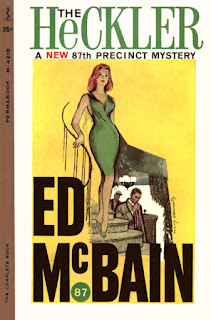 I’ve read a few stories involving the Deaf Man, so it was nice to finally get to meet him at the point when he was actually introduced. He’s a terrific villain who has the capacity to keep the whole of the 87th on their toes. He’s strong, cunning, logical, clinical and lethal and that makes him the perfect adversary for Steve Carella.


It’s April. Myer Myer is visited by an old friend of his father’s. The guy is receiving threatening calls insisting that he leaves one of his business properties by the end of the month, or else. As it happens, a number of other businesses in the city are being heckled and messed about in one way or another. Random packages arrive that were never ordered. Chauffeurs turn up to collect passengers who aren’t traveling. An entire catering and entertainment menagerie appear for a wedding where there is neither bride nor groom. The Heckler is creating low-level chaos around the city and for the police and it’s entirely part of his big plan.


Meanwhile, the body of an older man is found wearing nothing but a pair of navy-issue shoes, a pair of socks and a peppering of shotgun pellets. The identity of the guy is a complete mystery, but when an old night-watchman’s uniform is pulled out of an incinerator, the pieces begin to fit together.


They’re all the Deaf Man’s dirty deeds, of course. He’s all set to pull off a major heist and will go to any length to make sure everything goes to plan.


The unfolding of the novel is utterly compelling. Whether we’re with the detectives investigating the murder, the businessmen who are victims of threats and practical jokes or following the gang as they prepare to carry out their robbery, the levels of intrigue remain high.


I found it interesting that I was rooting for both the police and the thieves at the same time. By the end of it all, I was hoping the Deaf Man would manage to pull it all off in spite of all the horrific chaos left in his wake. Maybe you’ll feel the same. I won’t tell you how it plays out just in case.


The Heckler (US) is a spectacular book. It offers the space and time to get close to the characters while moving ever forward in the cases and schemes. Definitely one not to miss whether you feel like reading anything else in the series or not.