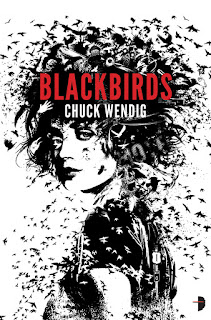 Chuck Wendig writes like a tornado might – brutal force and energy with the power to create havoc with the merest change of direction.
Having just finished his novel ‘Blackbirds’ (US), I feel like I’ve passed through the storm, or even like I’ve been passed through the eye of a needle (and at 13 stone, that’s not an image that should be possible).  I’m glad to be at the other side now, but I’d happily jump right back in there for seconds.
Mr Wendig clearly knows his craft.  His work is full of baited hooks that look so wonderful that they’re impossible to resist.  This achieves the effect of making the act of removing oneself from the pages something that’s very difficult.
Better still, he’s come up with an amazing premise – a girl who has the ability to see a person’s death, something that comes to her through the simple act of touching skin.  I guess that in itself that might not work, but throw in the fact that the she’s as much a victim of fate as the subject of her visions and it becomes much more complex.  Thankfully Mr Wendig doesn’t leave this situation alone and gently picks at it until he’s explored it completely.
The seer is called Miriam.  She’s a tough, rugged chick who lives on the road and feels she’s doing well if she gets to sleep in a motel.


Miriam’s all prepared for difficult situations, as she should be.  In her bag, as well as her all-important diary, she carries a can of pepper spray, a butterfly knife, another can of pepper spray and a hand grenade.  Most of these she’ll use at one point or another.
She’s using her power as a seer to take advantage of those who will die soon.  It’s a clever twist that makes a lot of sense.
Things go to pot, or more to pot, when she meets a trucker and discovers that she’ll be there for his last moments and that his last moments will be with a murderous, bald man who seems keen to stab out his eyes.  This seed is planted at the beginning of the book and will return as an ending, something that’s clear early doors, yet there has to be a twist and it’s worth the journey to find out exactly what that’s going to be.
I’m not sure I can think of a book that has so many unique and poetic images.  There’s a phrase on every page, in every paragraph almost, that is so beautifully turned and appropriate that it’s as if Mr Wendig has a genius form of Tourette’s Syndrome.  It’s amazing the way they inhabit the page and more amazing that they’re entirely appropriate.  These are not darlings that need to be killed by the writer because, in a sense, they’re like a skeleton throughout the story and they are part of the rhythm of this life.  Even more impressive, the book feels like it’s been written in one swoop as though the words have poured from the author without being engineered.
I wouldn’t really like to be pinned down as to the genre of this novel.  There’s the central fantasy element, an on-the-road story with a buddy movie element, there’s crime, layers of horror, comedy, poetry and philosophy.  These all co-exist with ease.  Thing is, and I think I mean this, it must be one of the quirkiest romances that’s ever been written.
Yes, I reckon Mr Wendig’s really a sweet honey with a heart of gold down there under all the warts and false-trails, a little like the character of Miriam herself.
Regardless of which genre it might be, this is a book that’s worth its weight in gold – witness the oily slicks of the rainbows reflected in the blackbirds’ wings, I urge you.  The brilliant cover is matched and then some by the words inside, I promise.
A slight aside, I'd pick up the paperback if I were you; the cover really is something you'll want to have on your shelves.
I’ve emerged through this side of the storm, have been completely emotionally engaged throughout, and here I sit too nervous to put down my umbrella as I know this tale will follow me around for a good while yet.