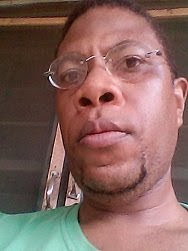 This week, I was delighted to hear that a story of mine that I'm very fond of has found a home. It's going to be published by the very exciting Voluted Tales.

They have a superb site to go and visit at http://volutedtales.com/. What I like is the approach. I've not seen quite so many things in the one place.

You can advertise your work or put out news items that will be on display at the home-page. You can look up writing resources and tips. You can blog and join a forum thread. You can follow the news of their up-coming projects and the submissions dates and, of course, you can submit work.

Not only that, they pay for the stories they use. Not bad for the one site, huh?

The magazines they produce are General Fiction, Noir/Thriller, Paranormal Romance, Serials and Young Adult - something for many, I'd say.

Why not pop over and see what you think? If you like what you see, join (for free) and start to use the resources - I for one am keen to take a good look around.

I might even go over there and advertise today's interview by Des Nnochiri. He certainly deserves a wide audience. Take it away, Des:

A: Because "Desmond" sounds like somebody's stodgy uncle. Which I actually am. An uncle (Hi, kids!), not stodgy. But still.

Q: How would you describe yourself?

A: Not too short; not too tall. Good-humored - with an edge.
Hey. I thought we were gonna talk about my writing, here.

Q: Who inspires you, as a writer?

A: No. I just wanted you to waste a question. Though, there was a time, back when my dad was stationed at the Nigerian Embassy in Gabon, when I tried reading the Britannica from A to Z. Interesting stuff. I didn't finish. What was your question, again?

Q: I didn't ask one. Hmm. An eclectic mix, of influences. Quite a few thriller writers, there. What's your approach to the crime and thriller genre?

A: I tend toward the psychological. Sure, there's blood and murder, but I'm more concerned with what motivates the killers - and the bloodhounds that pursue them. I like to get into their heads; explore what made them who they are. And makes them do the things they do.

Q: You have a reputation for using very few words, in your short stories. Why is that?

Q: So, what have you been working on, lately?

A: Well, there are three major projects, in the works. 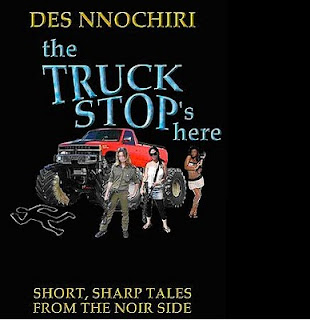 First is "The Truck Stop's Here", a collection of my noir short stories. Some of the material in it first aired on Christopher Grant's blog site, A Twist Of Noir. Some of it's fresh. All of it, I highly recommend.

Then, there's my novel, "Xero Option." It's a thriller, based on my feature-length screenplay, of the same name. And the project itself fleshes out the characters of two police officers who featured in one of my best-received short stories at A Twist of Noir. Which (the story) you'll find in "The Truck Stop's Here." Way leads to way, and all that. 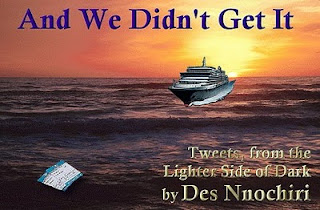 And the third one is called, "And We Didn't Get It" (Subtitled: Tweets, from The Lighter Side of Dark). Kind of experimental. It's a collection of - I guess you'd call them Twitter vignettes. Darkly humorous scenarios, played out in 140 characters, or less.

Q: Any other projects, we should know about?

A: I have several short and feature-length screenplays out there, screaming for celluloid. Couple of the shorts have made it off the printed page.

A young director named Andy Burchett filmed "GhostWriter" for me, in 2010. It's a horror story, about a pair of writers who make the wrong sort of bargain, to achieve success.

Then, there's "BFF: Best Friend Forever", a cautionary tale about the dangers of unrequited puppy love. That one's currently in production.

(a.k.a. The Website of Des Nnochiri) to find those two, and all my other scripts.

Haven't had an avalanche of reader comments, yet. But, I occasionally say something interesting.